Hey Space Cadets, here is the next installment in my series of book reviews.  I’m currently reading one of the greats of military science fiction, David Weber.  I want to read his novels, and mine them for useful skills.  He created one of the largest fan bases, so he is clearly doing something right.  Nothing has really changed on my end, so I won’t bore your ear holes with gibberish.  Instead, let’s jump right into the nuts and bolts of the story.

Title: The Honor of the Queen

Obtained: I bought it on Amazon 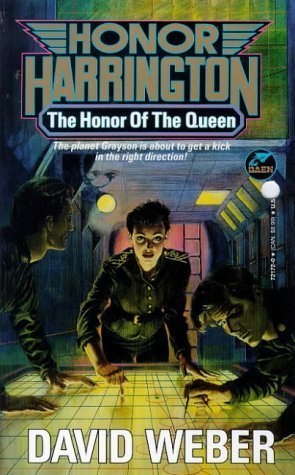 This book shares the story of Captain Honor Harrington of the Royal Manticoran Navy.  She commands the newly commissioned HMS Fearless, which replaced the one she lost fighting at Basilisk Station.  After the incident between the Havenites and the Royal Navy on Basilisk Station, tensions rose and a state of ‘cold war’ existed between the two nations.  Once her ship was commissioned after the one she’d had shot out from under her, Honor is tasked with escorting a diplomatic envoy to the planet Grayson to negotiate for the ability to put a forward operating base in their territory.  While there we see a clash of cultures between the more egalitarian Graysonites and the ‘modern’ Manticorians.  Her mission ends up smack dab in the middle of hostilities between the Protectorate of Grayson and the Madasan religious state.  If you want to know more, read the book!

The main character in this novel is Honor Harrington, a naval captain who is given command of the newly rebuilt HMS Fearless at the beginning of the novel.  Like before, I found myself drawn to her, but this time she came across as a little too perfect to me.  There were times where her perfection was annoying, but David Weber did a good job making her ‘perfection’ become a hindrance which is why I kept reading.  Regardless, she was a well-developed character with enough depth to make her believable.  She’s a no-nonsense kind of woman, who gets the job done and overcomes, no matter the cost.  This annoys me, because you get the impression that Honor doesn’t really worry about the hundreds of lives lost in every battle.  Unlike On Basilisk Station, Honor seems to sacrifice her troops needlessly in an all-out bid for victory.

I felt like the plot moved along at a steady pace, a bit slow in places but not enough to draw you out of the universe David Weber was creating.  The author loves his descriptions of the science of space flight, but I skim over those in favor of the actual story.  I don’t care how the space flight works, just that he has a reason that it does.  However, there are those who love this about David’s work.  Like his earlier novel, the plot was enough that I kept turning the pages for more.  What more can we really ask for!  This novel was heavier on the space combat, and the parts where we’ve combat on the ground it felt forced.  This novel was easier to read than book one, but I still had issues with the changes in POV.  It felt jarring and the shifts were hard to follow, though it wasn’t as bad as the previous novel.  I read this novel as an eBook, and it was published as a trade paperback in 1993.  Again, I’m guessing that the novel was simply poorly converted, and the indications of the swapping POVs weren’t carried over.  Either way, it was an issue for me.  The plotting was a four out of five grenades for me.

I felt like the world building in this novel was solid, there was just enough to understand everything.  The setting was cogently written, believable and fun to imagine yourself joining.  Probably a bad idea, as lots of people die in these fights, but such are the dangers of SciFy fandom.  Admittedly, I came into these novels after being seduced to the dark side by the TRMN Fan Club at RavenCon last year so I knew a lot about the universe going in.  I think it would’ve still stood alone on the laurels of the world David Weber created, but felt the need for full disclosure.  If you don’t remember, I enjoyed the world building in book one.  This book kicked it up a few octaves, which I loved.  There were parts where I felt it was lacking, but as a lover of stories I recognized them as hooks to what I expect to happen in later novels.  I would love to wax poetically here, but I’m striving to avoid spoilers.  In this section, I give David Weber five out of five grenades!

I felt like this one is hard, my visualizations were colored by the outside representations I’ve seen from the TRMN.  These fans are dedicated and cosplay his universe, so when I read these books they were what I pictured.  I think it was well done, but it’s possible my affiliation with his rabid fans colored my readings of things.  That said, I definitely feel like the descriptions of this book was greatly improved from the last one.  In that regard, this was a success for David Weber.  However, in some cases he went too far the other direction with regards to descriptions.  This isn’t an issue for me, but it’s worth noting it to you, dear reader.  I’d give this section five out of five grenades.

Aside from my issues with the jarring switches from one POV to another, I really enjoyed this novel.  It kept me hooked, and gave me an idea of how to make the hard science fiction approach to space combat more enjoyable.  Like the earlier book in this series, it was a bit heavy on the math.  I’m in no way qualified to judge the veracity of the math, but this book was otherwise enjoyable and I’ve already bought book three.  Another oddity, at least for me, was the pot calling the kettle black syndrome I saw between the Grayson Protectorate and the Kingdom of Manticore.  The Manticorian’s thought the sexist, antiquated views of the Graysonites were backwards.  The polygamous marriages, and how women were kept solely in the domestic sphere was foreign to Honor and her crew.  This seemed a bit judgmental to me, given the classists nature of Manticorian society.  One society was classist but egalitarian, while the other one was a merit based society for the males.  This might’ve been missed by some, and might just be one of my quirks, but it did stick out to me.  Not in a bad way, just an oddity I noticed right away.  I liked the novel enough to buy book three and will be reading that next.  When the author is such an iconic master like David Weber, us noobs need to read and learn.  And as an aside, how many books must one publish before we stop calling them noobs?  Asking for a friend!  Anyway, this wasn’t a WOWZER five grenade novel, but it was good.  Damn good.  Despite my issues with the POV hopping, was a book I would happily recommend.  Heck, I would even recommend that you buy the novel in the digital AND hardcover format!  Some novel’s I’ve only like enough to check out from the library, but this one you’ll want to buy for your reading pleasure and keep on your bookshelves.  Overall, the POV hopping wasn’t as bad in this novel, so if grenades weren’t such an all or nothing endeavor this would be a solid 4.5 grenades.  However, grenades don’t do things by half measures so four it is.

If this book sounds like it’s right up your alley, check it out after you read On Basilisk Station!  You won’t regret it!  Well, unless it keeps you up all night and you’re late to work… and then you fall asleep while driving and wreck your vehicle.  And because you’re late, since you have no car, your boss fires you.  And without viable employment, you become a rabid David Webber fan, blowing your life savings buying all gazillion of his novels in this universe.  And then, because you’re unemployed and need a job, you enlist into the Royal Manticoran Marine Corps.  As a grunt, you’re then deployed to the front lines.  And then you die in a hail of laser fire, forcing your spirit to carry on in the limbo as a ghost.  With nothing left to lose, you haunt David, the man who ruined your life.  And then his wife, a smart woman, exorcises you with holy water.  Okay, the fanboy/fangirl syndrome MIGHT kill you.  Be warned, but enjoy the high!