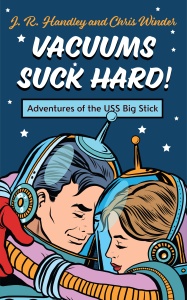 What could possibly go wrong monitoring the frontier?

For years he’s been itching for a big fight. Something he can use to impress his junior Space Marines. Something that’ll help him pick-up chicks. Something that might put him in some real danger. He gets excited just thinking about the possibilities. He’s hoping this tour aboard his ship, The BIG STICK will be different.