Hey Space Cadets, here is the next installment in my series of book reviews.  As I’ve mentioned earlier, I’m about half way through book three of The Sleeping Legion Series and loving it.  Loads of action, some surprises and a lot of exploding goodness.  I’ve also been outlining my next project based off of my short story from the Roswell Anthology, and thinking it’s gonna be the next big thing in science fiction.  It feels like a winner, but you’ll have to wait and see!

On to this specific review.  I was given this book by a local US Navy veteran and seasoned author to review and couldn’t say no.  No really, he might go all Tonya Harding on me!  Plus, as a veteran, I feel obligated to support other veterans where possible.  I won’t buy substandard things just BECAUSE they’re a veteran but if it’s a choice between two good things and one provider was a veteran, I’ll pick that.  I mention that, so you can read my review in as transparent a fashion as I can manage.  With that said, I truly did enjoy this book and I can only hope this comes through in my review.

Obtained:  I received an ARC for an honest review on Amazon and GoodReads, but liked it enough to buy it once it went live.  I’m even going to buy the other novels in this universe and likely review them as well! 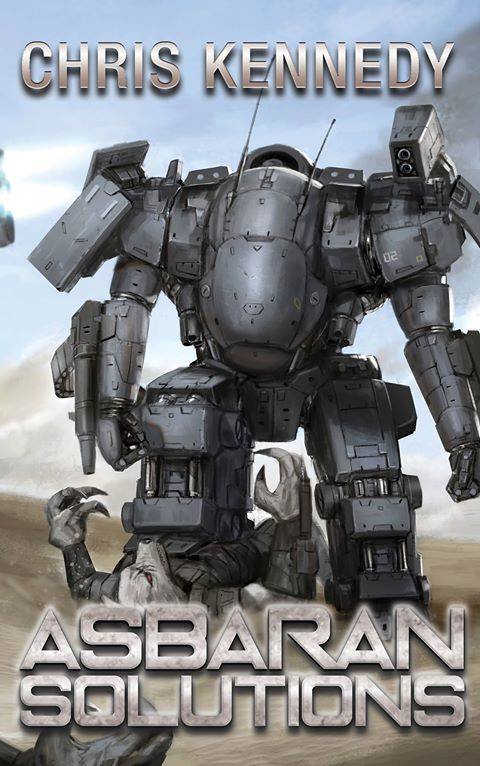 First, let me say that none of what I’ll say in this section couldn’t be found on the back copy of the novel.  I wanted to provide a spoiler free review, so here goes nothing!  Ultimately, this is a family saga, a tale of redemption and one mans journey to familial acceptance.  One of the main characters, Nigel Shirazi was first in line for the chairmanship of Asbaran Solutions.  It was to be his birth right, commanding one of the prominent “Four Horsemen” mercenary companies.  That is until his maladaptive behavior cost him everything, ending in hedonist downward spiral.  And finally, a rock bottom where he is disinherited.  After being discarded by his birthright, he enjoys the life of a rich playboy until something happens to rock his world.  An enemy gets to his family, and Nigel is all that stands between this hidden foe and the destruction of Asbaran Solutions and the Shirazi family line.  In the end, the adventure is partially Nigel’s war within himself.  If he can gain some self-control and self-discipline, he just might restore all that was lost.  All he has to do is rescue his sister from an unbeatable foe, easy peasy.

There are three main characters in this story; The Asbaran Solutions mercenary company, Nigel Shirazi and Thomas Mason.

Nigel Shirazi:  He is the principle main character in this story, on a quest of personal redemption.  By saving his sister, he seeks to save himself and prove his worth to the family who’d dismissed him so many years ago.  At first, I really didn’t like the spoiled man-child that we met in the beginning of the story.  However, as time went on he sort of grew on me as Nigel grew into himself.  He had a definitive character arc, was flushed out and thoroughly described.  You never felt like he was a blank shell, he was a character all on his own.  If we met in real life, I’d either drink a beer with him and swap war stories or shoot him on sight.  Would really depend on whether I met the Nigel from the beginning of this book or the one from the end.  I deeply respected his love of family, and his sense of familial obligation.  Blood really IS thicker than water, and it was nice to see that this was a sentiment Nigel understood.

Thomas Mason:  He was your stereotypical soldiers soldier and helped guide and shape the path of the troubled Asbaran Solutions.  He also has some personal reasons for going with Nigel on what appears to be a suicide mission, though I can’t go into that without giving some spoilers.  He offers the military background, and serves as a foil to Nigel’s playboy ignorance.  Overall, I really liked this character and would love to read more about him.  I wouldn’t mind if he got his own book as well, giving him room to develop into an even more flushed out character.

Asbaran Solutions: This is the company that is at the heart of the adventures of Nigel and Mason.  For Mason, it’s a job and a personal journey you’ll have to read about but for Nigel it’s so much more.  For Nigel, it’s about saving his sister and his families honor.  It’s a connection with his heritage and his forefathers.  The special time he spent on his grandfather’s knee learning about the galaxy and the mercenary life that Earth provided to the sentient species whom inhabited it.  With its mere existence, this company drives the plot and serves as the invisible puppet master pulling all the strings.

Like most of the military science fiction I love to read, this was an action-packed novel.  The beginning was a bit of a slow start, but once it took off it never really lagged.  I wasn’t able to read this book from start to finish in one setting because of its length but I wanted too.  I believed that the tactics worked for the novel, especially the aerial ones, but what do you expect from a naval aviator?  The action on the ground was believable, though lacking in tactical sophistication and depth.  However, when you had a bad assed mech like their CASPer’s you can get away with a run and gun strategy.  The story flowed seamlessly from one plot point to another, which made it easy to read and follow.  There were a few times where I was confused by what was going on, but this was likely because of my TBI.  After I backtracked and re-read the part that got me it became very clear.

This is the first book I’ve read by Chris Kennedy, but I’d heard good things and his reviews were solid. I wasn’t disappointed!  This world was very flushed out, and left you curious about the world.  Heck, I bought his book AND the other book in the universe after I read this one.  While this is science fiction, and you definitely need to have some suspension of disbelief for the aliens Chris Kennedy invents, within the universe he builds they’re totally believable.  I also found myself sympathetic to Nigel, as he struggles on his quest for redemption.  Asbaran Solutions definitely had shades of the Prodigal Son, though with a metric butt ton more death and explosions.  The one part I wasn’t thrilled about was the concept of Earth evolving into a system of the mercenary corporate planet, without any nation states, but it is a common trope in science fiction.  Overall, this didn’t dissuade me from enjoying this story and I’m aware that many people LOVE those kinds of universe set ups.  In a nut shell, the world building gets an A- from me, but only because of the lack of explanations on HOW we became a planet without nations.

This book was chalk full of visualization, and you could definitely imagine yourself in this world.  It felt very flushed out, and there were times where you could even smell the aliens.  I love it when a book is this immersive, where it takes you deeply into the world.  For me, if a book isn’t described enough that I can imagine myself into the story.  If a story is truly good, I often find myself imagining what happens when the book ends.  That doesn’t work in books where the world wasn’t flushed out.  In this category, Chris gets an A+++!

I think that the easiest way for me to explain my thoughts, is to tell you how I received the novel.  Like with the Wraithkin novel, I was given a free ARC (advanced reader copy) eBook a little over a week before the novel went live.  In return, I was to post an honest review on Amazon for the author on the day it launched.  I loved this book, it was definitely 5 out of 5 Grenades.  Chris Kennedy had me hooked from the beginning, and kept it going throughout the whole novel.  I went on to buy a copy, because I liked it enough that I wanted to support the author.  I also went on to purchase the Cartwright Cavaliers, another novel in the Four Horsemen Universe.  It’s an amazing adventure, a look into Chris Kennedy’s twisted imagination, and leaves you wishing that his therapist has a therapist.  This is a book I would happily recommend, and an author I will definitely read again.  Heck, I would even recommend that you buy the novel!  But hey, it’s easy to spend someone else’s money!  This is definitely a novel worth buying, versus merely reading for free at the library.

If this book sounds like it’s right up your alley, check it out!  You won’t regret it!  Well, unless it keeps you up all night and you’re late to work… and then your boss fires you, because you became a book addict and a rabid Chris Kennedy fan.  And then you track him down, and climb into his window in your skivvies and he shoots you with grapeshot.  Okay, the fanboy/fangirl syndrome MIGHT kill you.  Be warned, but enjoy the high! 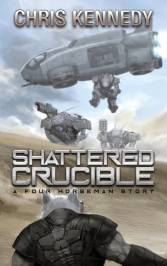