Hey Space Cadets, here is the next installment in my series of book reviews.  As I’ve mentioned earlier, I’m working on book four of The Sleeping Legion Series.  Full speed ahead, and damn the torpedoes or something!  I will hold what I made in book three; loads of action, some surprises and a lot of exploding goodness.  Don’t believe me?  Operation Breakout is live!  Now I’m working on the last two novels in The Sleeping Legion Series and outlining my next project.  More of that to come soon!

But enough about me, onto this specific review.  Now let’s get to it!

Title:  The Red Tide: The Chinese Invasion of Seattle

Obtained:  I bought the story and audiobook combination from Amazon. 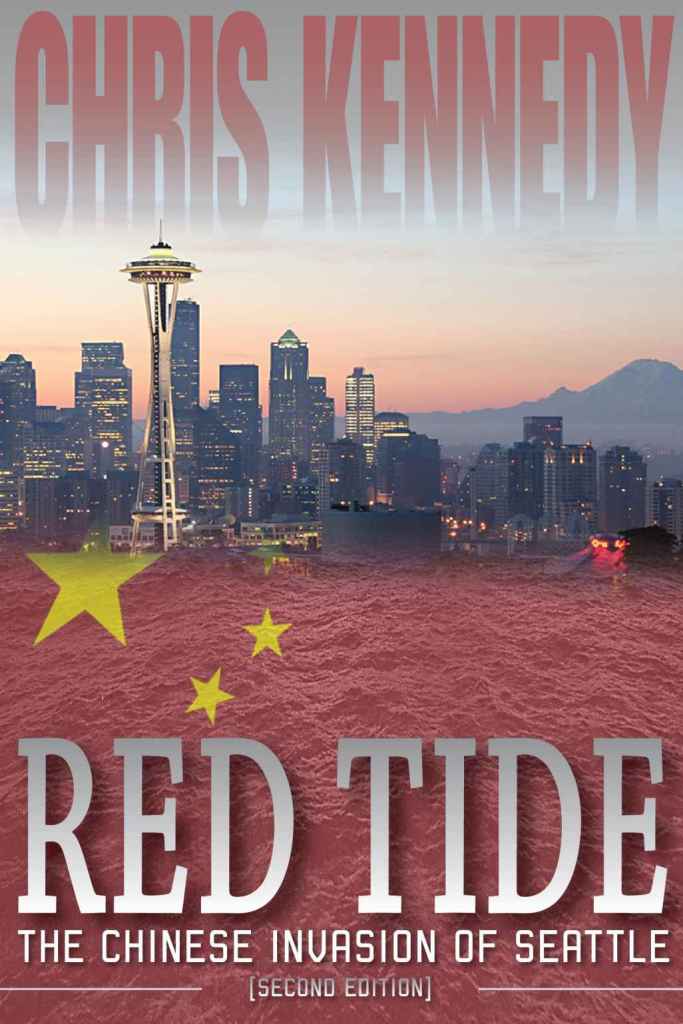 First, let me say that none of what I’ll say in this section couldn’t be found on the back copy of the novel.  I wanted to provide a spoiler free review, so here goes nothing!  This novel is a very Red Dawn-esq story of what it might look like if America was invaded.  In Chris Kennedy’s twisted imagination, China uses an attack on America to hide their campaign to reclaim Taiwan.  It works, and an unprepared America quickly loses the Pacific Northwest.  But despite how bloody things get, they can’t crack the will of the American people.  Will the United States get Seattle back?  It will, if a shot down F-18 pilot, a retired Navy SEAL, and a platoon of Army Rangers have anything to say about it.

While it seemed like there was no main character in this novel, there were three that we’re told to watch for on the books blurb.  So here goes a review of those people!

Shawn “Calvin” Hobbs: He is a fighter pilot for the US Navy who gets shot down during the opening salvo of the war and ends up leading a small band of disenfranchised troopers in a war against the occupying force.

Ryan O’Leary: He is a retired US Navy SEAL who’s taken to the hermit lifestyle when an invasion of his home forces him back into the fight.  When Lieutenant Hobbs is shot down, he rushes to save him and together they take on the world.

Army Ranger Platoon: Just your average group of grunts who join in on the mayhem to resist the occupying forces.  The provide the troops that O’Leary and Hobbs lead into the mouth of the Chinese Dragon.

While the novel’s blurb says that these were main characters, it didn’t really feel that way.  There are too many characters popping in and out of this story, which meant I didn’t really get behind any of them.  This made it even more important for the premise of the story to be compelling, but Chris provided that.  The characters that were there felt hollow, because we only saw them briefly before they died.  I was helped by my time in the service, because it let me relate to the characters but I don’t know that someone without my background would get out of the characters what I did.  I will say, however, that even though there were too many characters to get close too I didn’t notice it until I sat down to write this review.  Because the pace of the story kept me hooked, and deprived me of sleep, I’ll give the author 4 out of 5 Grenades.

Like most of the military fiction I love to read, this was an action-packed novel.  The story is set in modern day Seattle and follows a series of events that lead to China invading as a feint to keep the US from honoring our commitment to Taiwan.  If you don’t know, the US has treaties with Taiwan that state America will defend the nation from China in the event of an attack.  It was an interesting set up and premise, which had shades of Red Dawn in it.  I loved Red Dawn, and consequently I loved this story.  With my military background, I thought the way the military was portrayed was credible.  I will say that the Chris Kennedy, a retired Naval Commander and fighter pilot, spent a lot of time addressing the air war.  I’m not qualified to judge those situations, but from the outside looking in it was credible, which is all I needed.  Why is the critique of the military in the “Plot” review section?  Because in a military fiction novel, the tactics are integral to the plot.  In this section, I give Chris 6 out of 5 Grenades!

This is the second book I’ve read by Chris Kennedy, but I loved the first book written by him that I read so decided to give this one a chance.  Further, this novel had solid reviews so I was sold, and gave it a chance.  I wasn’t disappointed!  After this novel, I went and bought every one of his published novels.  This world was very flushed out, but it was set in the modern world so it had the advantage of the readers pre-existing world view.  Regardless, the novel built on the modern world and made his divergent path extremely plausible.  I can’t wait to read the rest of this series, and see where the war with the occupying forces in Chris’s world goes.  This novel has been placed in the science fiction section on Amazon, but in the first book in this duology we see none of it.  Other than that one complaint, it was a great book and I can’t wait to read the second book in this series, [Occupied Seattle].  I give the world building 5 out of 5 Grenades.

This book was chalk full of visualization, and you could definitely imagine yourself in this world.  However, in some places Chris went a little over board with the explanation of the various military minutia.  Maybe this is because I already know about some of this and don’t particularly care about military aviation?  Others might have a different opinion here?  Regardless, these flaws didn’t distract from the book to such a degree that I wouldn’t finish the series.  While parts of it were a flop for me, I still give Chris a B+++ in this category!

The narrator, Craig Good, did an amazing job narrating this book.  He didn’t bore you, or make you zone out because of his monotone.  His performance didn’t feel robotic, like a machine was reading the novel too me.  Instead, it felt like a friend was sitting with me reading an amazing story that he couldn’t put down.  The voices of the various characters were cheesy and wonky, but overall it kept me engaged throughout the periods I was listening to this book.  I would give him a 4 out of 5 grenades for his explosive performance.  The only reason it wasn’t a 5 Grenade experience was the lack of voice acting for the various characters.

I really loved this book, though the head popping was a bit jarring.  However, this wasn’t really an issue for me because the story was so engaging that I couldn’t put it down.  This novel was awesomely written and the cover was amazingly invocative.  The military culture shown in this book was spot on, especially the nicknames, even though the author laid it on a bit thick.  Again, with such a compelling story you won’t notice!  As for the military equipment, well it was like a Naval Aviators porno, the amount of details given but I was able to skim over these details so I could enjoy the action in this story.  Basically, Chris had me hooked from the beginning, and kept it going throughout the whole novel.  It’s an amazing adventure, a look into Chris Kennedy’s twisted imagination, and leaves you wishing that his therapist had a therapist.  This is a book I would happily recommend, and an author I will definitely read again.  Heck, I would even recommend that you buy the novel!  But hey, it’s easy to spend someone else’s money!

If this book sounds like it’s right up your alley, check it out, you won’t regret it!  Well, unless it motivates you to squeeze your fat body into your old uniform and you die from the shock to your system.  And when you die, you end up in limbo, all alone.  And since you’re alone, you go insane from the solitude.  And in your insanity, you try to fly, but can’t.  Instead, you’re left merged with the asphalt you fell onto at your failed effort to recreate Kitty Hawk.  Stuck in the asphalt, your soul wastes away until there is no you left and you fade out just as Ragnarök begins.  Yeah, it would suck to miss that so maybe you should tread lightly!  Well yeah, I guess this could be bad for you.  But hey, at least you got to see eternity pass you by as you fade into nothing.  On second thought, be warned, fanboy/fangirl syndrome MIGHT kill you.  Be wary, you were warned!  And if you have to go out like that, at least enjoy the view from up there!