Hello, Space Cadets! Today, I wanted to introduce you to another author from my WARRIOR WEEKEND INTERVIEW SERIES.  Paul is a native Scotsman now settled in Northern Ireland with his wife and dog. He has had a varied career: a twenty-two-year stint in the British Army, followed by several years as a constable in the Police Service of Northern Ireland all of which have given Paul a unique outlook on life. He combines this experience with his love of science fiction and has been writing Sci-Fi since 2014.

Well, I joined the British Army at the tender age of 17 ½,  initially training in the intelligence field before getting secondary training in communications.

Following the end of my training I spent nearly five years with airborne forces before bouncing around for the remainder of my service, all 22 years of it, with various units serving in virtually every theater where you would expect to find the British military, Northern Ireland, the Gulf, the Balkans as well as Africa, Central America, and a few others I would rather forget.

Over the years I did a lot of time either sitting waiting for something to happen (we all know that feeling the old military adage of hurry up and wait) or simply traveling. Either way I had the opportunity to read a lot and I hated it when authors, more correctly, authors who had never served or failed to do their research correctly, got the basics wrong or simply ignored little things like how it takes time to move units and equipment around or replace/repair them following combat.

Worse still, and one that really grates on me, how one hero/heroine, can be everywhere at once when we all know that to win in combat it takes team work.

When I wrote my very first story, a short entitled ‘Ghost Soldiers,’ I probably received the biggest compliment I have ever had as an author.

‘Ghost Soldiers’ is based around a fictional Black Ops unit operating in a non-to distant future Northern Ireland. The story uses real life places and was directly based on my own experiences in that country. The compliment I received was from an ex-soldier who had during his own career served in the same area that is central to the story, and he told me that while he was reading it that it was probably the most realistic book he had ever read. Nothing gets better than that.

That feeling of realism, putting myself in the boots of my characters and reacting as I would have reacted, I think, is what gets the reader to believe the story even if it is science fiction set on a planet hundreds of light years away using weapons we haven’t even invented yet.

As my wife keeps telling me ‘you can take the boy out of the army, but you can’t take the army out of the boy.’ 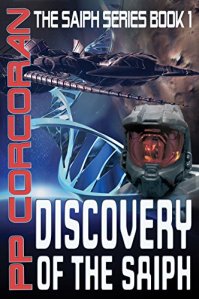 Hmm, probably about four or five years ago. I’d been toying with the idea for years, but I had never had the time to actually sit down and do it. I was going through a bit of a rough time as a lot of ex-servicemen and women do and I found that writing was quite cathartic so with a bit of encouragement from my wife and friends I sat down and decided to actually finish a science fiction novel that had been playing in my head for a long time.

The Saiph Series was the result. 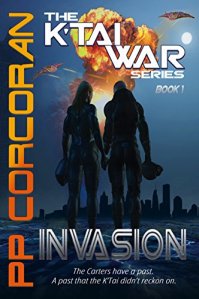 Now that is a hard question. Possibly ‘Ghost Soldiers’ because it got me into writing in the first place. Then again, the Saiph Series books because they allowed me financially to become a full-time writer. On the other hand, there is my new series, ‘The K’Tai War Series.’ Book One, ‘Invasion,’ was great fun to write because it combines the Black Ops stuff with shoot them up sci fi.

Yeah, I think I’d have to say ‘Invasion.’ Until I write the next Saiph Series book, then it will be that one.

I’ll let you into a little secret here, the characters that I write, so the reader doesn’t like them are mostly based on people I met during my service. And I make sure they all meet a nasty end. That always feels good.

How many of the specific scenes you wrote were inspired by your service?

Believe it or not quite a few. Obviously, I didn’t go around doing space marine stuff while serving but once you get down to it going through a hatch way or air lock in a fictional book is just the same as going through a door or window of an occupied building in a real combat zone. The same for coming under fire and being pinned down. You have to do something, or it’s not going to end well for you be that a marine in future armor or a poor infantry man today. And that’s where I think an author who has served can make that scene more realistic, they’ve been there and done that.

Do you feel like your writing has served any therapeutic value for you?  Has it helped you process your military experiences?

Undoubtedly. I count myself amongst the lucky ones, I’ve never had to suffer what some ex-servicemen and women have gone through. And I like to think that my writing, especially ‘Ghost Soldiers,’ helped me keep those things at bay. I got it out before it had the chance to become something that I have seen so many of my friends descend into.

As we speak, I am helping one of my friends write his own book about his experiences in Afghanistan, and if there is anyone reading this who knows someone who could benefit from getting their thoughts and feelings down on paper then I would encourage them to do it.

Strangely I actually know the answer to this one without thinking about it too hard, and of all people, it’s one of the enemy.

Lady Kara is the CO of the Black Legion in my new book, ‘Invasion.’ It might seem odd that I have chosen an enemy combatant as the person I would most like to serve with but hear me out. She is strong, both emotionally and mentally. She has a sense of duty and loyalty which is the core of everything she asks and expects from those who serve under her. And, to me this is the most important point, she has an inalienable sense of right and wrong.

Without giving the plot away, there is a scene where unarmed, defenseless civilians are killed by forces on her side. Her immediate reaction is one of disgust. This is not how wars are meant to be fought, and those who are responsible swiftly get their just deserts.

I have served in Bosnia and Kosovo and have seen the results of when a blind eye is turned to the rules of war and the sad outcome which lives with generations and only fosters resentment which years down the line will come to the fore and start the cycle once again.

Lady Kara sees only right and wrong, and woe betide anyone on the wrong side. Now that’s my kind of boss.

A grade one A-hole by the name of Commander Bryer Anderson. We meet him in the second book in the Saiph Series, ‘Search For The Saiph.’ That man has a stick shoved so far up his rear that the bristles are coming out his mouth. Everything has to be done by the book and be signed off in triplicate. But the worst part is taking credit for work done by a subordinate. Even thinking about him wants me to go and kick his ass up and down the street.

In all my service I was lucky enough to only encounter one such individual in a position of power, and to my never-ending gratitude his boss recognized him for what he was and sent him packing within a month.

If you could serve in any of the worlds you created, which one would it be, and why?

Okay I know it’s a bit pathetic, but of all the worlds I have created in my author life, the answer has to be Earth. At the end of the day, it’s still home and I like that.

Pathetic but hey, sue me.

Can you tell us how all of that has lent itself to your most recent release?

I would like to think, though the reader will be the final judge of it, that my writing has been getting better and better as I go along and with the release of ‘The K’Tai War, Book One, Invasion’ I combine not only the sci fi military side of things but the effects on family life that conflict has. The separation, the worry and the constant efforts to protect the ones we care for no matter what the cost.

And since you’ve finished that novel, what are you currently working on and when do you expect it to be ready for publication?  I mean, you don’t need sleep right?

Sleep is a highly over rated commodity as you know well!

So what am I working on now… how long have you got?

I’m working on the fourth novel in the Saiph Series, ‘Legacy Of The Saiph,’ due out mid-October. The second book in the K’Tai War series, ‘Resistance,’ which I hope to have out around Christmas.

A yet to be announced title in a universe inspired by an author who is doing pretty well in the rankings at the moment but more to come on that.

And finally, if all that was not enough, I’m a few days away from making my debut as a small press publisher. I have started up my own small publishing press, Castrum Press, and mid-September we launch our first title from a brand-new science fiction author, Matthew Williams, entitled ‘The Cronian Incident.’ I like it and hopefully, the readers will too.

If this convinced you to find out more, look up P. P. Corcoran.  I hope you all had a great time getting to know about P. P. Corcoran.  Don’t be afraid to say hello here or on his website.  If he doesn’t respond quick enough, ask him if he’s English!  Mwahahaha!!  That’s always a way to anger a Scottish warrior!