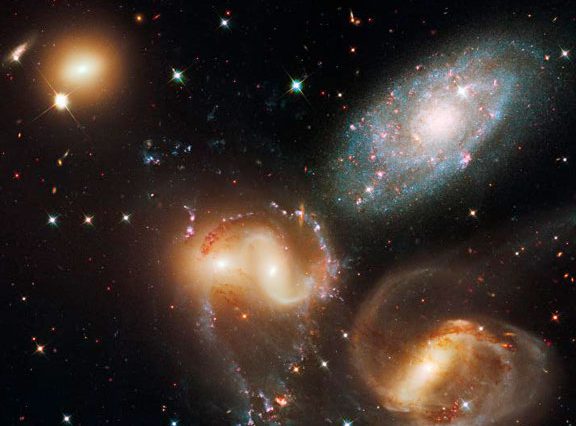 Hey Space Cadets, how’re you doing?  I’m good, working on finalizing the edits on a short story and starting writing my super secret book. Meanwhile, I’m still reading and wanted to share what I’ve enjoyed lately. Here is the next installment in my series of book reviews.  I’ve just finished editing the final book of  the Sleeping Legion Series, which is with Boss Man for final approval, and am working on editing a short story that was accepted into The Expanding Universe 3 Anthology.  Finally, I have two recent publications to recommend to you. If you haven’t read it, Operation Breakout and a Four Horsemen Anthology, For a Few Credits More are available on Amazon.

But enough about dallying, onto the review!

Title:  A Fistful of Credits: Stories from the Four Horsemen Universe

Obtained:  I bought this novel from Audible. 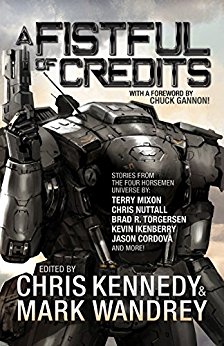 Today my book review will be a bit different, as I’m going over an anthology that I recently bought.  This is the first anthology set in the Four Horsemen Universe and doesn’t directly involve the four book series arc.  Instead, it tells tales on the periphery of the world created by Mark Wandrey and Chris Kennedy.  Since it’s a collection of short stories, I’ve picked a few I really liked to give you my thoughts on.  If anyone has a different or better format for an anthology, please comment below!  Finally, in the effort of full transparency, I have a short story included in the second anthology in this universe.  That book is currently for sale here if you want to buy it and give it a listen.

“The Last Alpha” by Mark Wandry:

This short story tells the tale of one of the survivors of the first Earth mercenary contracts.  We learn about what happened to him, and the consequences for his family.  The story flowed smoothly and had a lot of action. There were a few unexpected twists and turns, and I enjoyed every second of it.  I would definitely want to read this story if it was expanded into a novel!  There was so much room for Mark to turn the story arc into something much longer, and I admire his artistic discipline to keep the work to the size that he did!  This story gets 5 out of 5 grenades!

“Breach of Contract” by Terry Mixon:

I had the privilege of beta reading this short story before submission, and I loved every second of it.  It only got better after seeing how the narrator made it come alive. This was a story of revenge and betrayal, and the espionage and intrigue kept me guessing.  The author really had me think the story was gonna go left until it went right.  I couldn’t tell how it was going to end, and it made this a thrilling read.  There wasn’t any battle of guns, but we were instead treated to a battle of wits.  The alien race that Terry added to the Four Horsemen Universe was fun, and I wouldn’t mind seeing it show up in other stories!  I give this story 5 out of 5 grenades!

This was a fun story about space exploration and told the tale of a merc company contracted by the Cartographers Guild to explore the forgotten reaches of space.  Instead, they find a forgotten colony, false gods, and lost technologies.  The author did an outstanding job building a sense of wonder, re-creating the awe that awaits us in the cosmos.  I couldn’t recommend this story more, and wouldn’t mind if the crew of the Lilly continued their journey into the unknown regions of the universe.  A solid 5 out of 5 grenades!  Seriously, this short story alone made it worth the Audible credit!

I have to say, this story took me by surprise.  It tells of a feline alien race, and one particular alien assassin.  The author is clearly a cat person because she had the mannerisms down perfectly!  And when said feline assassin, took a human pet I snorted out my coffee.  Damn, but I got funny looks at my local Starbucks.  Time to cross the street to the Dunkin for my coffee fix until they forget about it!  And what would you call a cat assassin?  Maybe a catssassin? Anyway, this was an excellent story, and I can happily report that a novel based on these characters is in the works!  Well done, I enjoyed every second of it.  I listened to this one twice, it was that good.  Obviously, this story gets 5 out of 5 stars, and I’ll be pre-ordering that novel as soon as Kacey finishes it.

“Hide and Seek” by Christopher Nuttall:

Another espionage story, with plenty of action for the mystery lover in all of us. And the surprise at the end made it worth the time spent reading. The action was well written, and the choreography made perfect sense.  I could envision the fight scenes, and I loved the minimalism of the settings.  The descriptions were concisely written and allowed the short story to flow naturally.  The world building was well done, and the ending was a perfect mix of a cliffhanger and resolution.  I really enjoyed this one, and give this a solid 5 out of 5 grenades.

This was your standard military science fiction adventure, mixed with a story of betrayal.  Can the Roughneck Mercs live long enough to get a little vengeance?  Will the overwhelming numbers of the enemy grind them into the dust?  Only way to tell would be to buy this anthology and give it a glance.  This was a well-written story that evenly paced the action to keep the plot moving along.  I liked the characters, and it fit solidly with the Four Horsemen Universe.  I give this one 4 out of 5 grenades, and would definitely buy more books from this author.

This was an AMAZING story about humanities search for the next big tech, and the quest for the ultimate payout.  A new CASPer upgrade, with a cybernetic bio-organism as the pilot.  It could be huge, save lives and make tons of Galactic Credits.  What could possibly go wrong with a computer that thinks for itself?  There were a crap-ton of twists I didn’t see coming at the end, and there was enough adventure and suspense to make this story good to the last drop.  Ironically, the story was so expertly crafted that it told the tale without needing more words.  While I would love revisiting the fun characters again, this short story stood solidly on its own two feet.  I will definitely be reading this one a few times to learn what Brad did right.  A solid 5 out of 5 grenades.

This audiobook was excellently produced and was fun to listen to.  The narrator, Craig Good, did an amazing job with this anthology.  I’ve listened to other books he narrated, and they were all equally well performed.  He doesn’t bore you, or make you zone out because of his monotone.  His performance felt like a friend was sitting with me reading an amazing story that he couldn’t put down.  And the accents he added made me smile, and laugh a few times.  The fact that he was able to make so many believable characters was amazing, considering the dozen or so short stories included in this anthology. His narration kept me engaged throughout the story, which is all you can really ask for.  This was another story I listened too on audiobook and didn’t read a physical copy.  Even the stories I didn’t like as much or were just okay, were enjoyable because of Craig’s narration.  Overall, I loved the quality of his work and would recommend this narrator to other audiobook fans.  I give him a 5 out of 5 grenades for his performance.

I really liked this anthology, it had over a dozen of well written short stories set in a universe I enjoy.  The stories were a hit and miss, some I really loved, and some just weren’t for me.  Let’s be real that is normal for an anthology, and part of what makes them useful.  You get exposed to new takes on things and see the world from multiple perspectives. I’m confident that you’ll find you like more stories than you would normally skip.  Even though there were some that just weren’t my thing, I recognized that all of them were well written.  I chose to highlight the ones that stood out to me, and give you my thoughts. Like always, I went the spoiler-free approach. So what does this mean for my overall ranking?  I really enjoyed this collection, and happily, recommend it.  If you’ve noticed, I give a lot of higher reviews, but that’s intentional.  I choose to study authors who do it better than I could, hoping to learn from the seat of the masters.  Because, seriously, I want to hook you from the first page!  I want to weave the action in such a compelling way that you want to jump into the armor yourself.  This leads me to screen my books before buying them.  Life is too short to read books that you don’t like.  Luckily, my tastes are diverse, and I enjoy the classics too.  I just only write reviews on the science fiction stories I’m reading.  Overall, this is a book I would happily recommend, and authors I will definitely read again.  I freely give this novel a 4 out of 5 grenades!

4 thoughts on “Book Review: A Fistful of Credits”