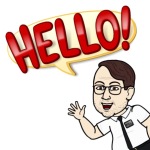 Hello, Space Cadets! Today, I am currently at HonorCon – having a great time!  However, I don’t want you to feel left out so I decided to introduce you to another author from my WARRIOR WEEKEND INTERVIEW SERIES.  John Mangan. 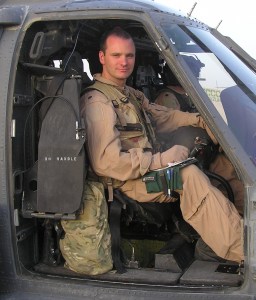 Tell me a little about your military service

After high school, I went into the Air Force due to my love affair with contraptions that fly. After the Air Force Academy, I went to pilot training and was able to get into the Combat Search & Rescue career field. I was drawn to the rescue mission because the inherent morality of saving another person’s life makes the sacrifice and risk worthwhile no matter the circumstances. After 9/11, things got busy and stayed busy. I wasn’t particularly gifted as an officer or a pilot, but I had a knack for stumbling into the middle of things, places where I had the chance to do some good. I was sort of like Forrest Gump in a helicopter.

How do you feel that your military service influenced your writing?

My time in Iraq and Afghanistan allowed me to see how people react in extreme life or death situations. I think those experiences have given me the ability, as a writer, to capture the gravitas of a moment, to move past the flash and thunder of modern warfare and find the human side which is far more interesting. Narrating a series of exciting military events is pretty simple, kind of like a Jean-Claude Van Damme movie; Kick! Chop! Pow!  That part is easy, but to drill down and bring back a core sample of the human truth…that’s where the challenge lies.

Strangely, I think that in order to communicate the spirit of a moment sometimes you might have to digress from the stone cold facts of reality. Think of the scene in Apocalypse Now where Captain Willard arrives at the Do Lung bridge and goes on a fruitless search for the local unit’s commander. He wanders around a battlefield, lost in the darkness, searching in vain for a man that doesn’t exist, surrounded by chaos, explosions, rock music, screams and people who have passed beyond any measure of control. It might not be factually accurate, but damn if it doesn’t communicate the spirit of the Vietnam War. Sometimes metaphor and artistic illustration can communicate the feeling of a moment better than a simple recitation of facts. Look at the most powerful forces in life: Love, grief, sacrifice, triumph, loss, shame.  None of them can be effectively communicated with a simple description of events—you have to drill deeper.

My military service also showed me the importance of humor in horrible situations. I’ve never laughed so hard as when things were at their worst. Humor is a salve that protects, braces and heals people caught up in the worst of times. Likewise, in Into a Dark Frontier, I try to keep the reader on a string yo-yoing between horror, awe, tension and laughter, one after the other, but always back to laughter.

Do you think that your military service and more specifically your training adds to the realism in your books? If so, how?

Hundreds of writers have cracked the nut on how to accurately depict warfare in a physical sense, so I don’t think that I’m breaking any new ground there. Today’s audience already knows the mechanics of battle in excruciating detail; my goal was to create a story that communicates a feeling of moral, spiritual and physical chaos. I wanted to share what it’s like to make mistakes, face unwinnable moral dilemmas and yet still press on, bearing the wounds that you’ve collected. That’s the sort of realism that I wanted to depict.

I dabbled in writing for years, just as a pleasure. But as things spiraled downhill in Afghanistan and Iraq, my writing became a form of escapism. Yes, I was escaping to a world that was just as brutal and tragic as what was outside my tent, but in the written world I was in control. It was a place where I could save or condemn characters, and there was always a reason behind the tragedy. Out in the real world, tragedies occur for no reason and serve no greater purpose. I would go out and bring our mutilated boys back to the hospitals and morgues. It’s just tragic, a soul-crushing loss that will echo through the generations and diminish us all. I could never see a greater purpose to it, but in my fiction that loss can take on meaning and serve a greater good. Perhaps that’s what fueled my writing; a need for meaning. 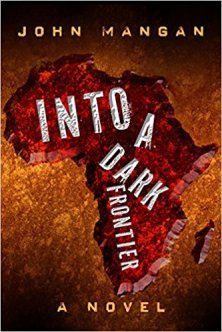 Of all your work which was your favorite to write.

I found that what I enjoyed most was trying to get a character’s syntax, actions and reactions to ring true. In order to do that you have to understand their motivations, passions, and fears. Eventually, the characters become so complete that they develop a will of their own and their humor, banter and actions become self-sustaining, carrying the story and dialogue in directions you hadn’t anticipated. Humor springs to life, emotions flare, and life happens. It’s like throwing a handful of magic seeds into fertile soil, watering it and then watching to see what springs to life. Sometimes you get a weed that needs to be pulled, sometimes you get a giant beanstalk to climb.

With the exception of the villain, Graeme Mujuru, all of the people in my book are amalgamations of people I’ve know or characters I’ve encountered. Because of that, I felt tremendous pressure to depict them accurately and honestly. I wasn’t free to make the characters do and say whatever I wanted because I had to stay true to the real people behind them. Michelangelo said that he didn’t create the David statue, he said that the form already existed within the rock and that he simply exposed it for others to see. I felt a bit like that as I was describing these characters and telling their story. No, I’m not comparing myself to Michelangelo.

How many specific scenes were inspired by your military service?

Numerous lines of dialogue are direct transcriptions of conversations I either overheard or was party to. There is a joke that develops over 10 chapters as my protagonist, Slade, interacts with some blokes from New Zealand. This joke was actually played on me, word for word, by some Australian Commandos that I worked with in Afghanistan. I won’t ruin the joke, but it revolves around the use of the moniker “seppo.”

It isn’t just real events that I’ve depicted, it’s more about human interactions and the ramifications of those interactions. I wanted to show the reader what it feels like to have a living, breathing human being stand in front of you and say, I’m placing my life in your hands, now do the right thing. I want the reader to know what an incredible responsibility that is, how it changes you and humbles you, and the awesome stress it places you under. I also want the reader to know what it’s like when you fail in that responsibility. This story isn’t about rainbows and happy endings, it is about people who have the strength to endure in spite of their mistakes and the burdens they carry. That strength is what I saw downrange, and that is what I wanted to share with people.

Do you feel like your writing has served any therapeutic value for you? Has it helped you process your military experiences?

Yes, I did much of my writing while deployed. Being on 24-hour rescue alert lends itself to a lot of sitting around, so I spent much of that time throwing ink against the wall, seeing what stuck. Whenever I found something interesting, I would reach down into the mess, pull it up by the ankles, clean it off, then spank it on the ass until it began to scream. That birthing act takes you to another place and is a potent form of creative escapism.

But it wasn’t just escapism that drove me, I feel a strong need to tell the stories of the men that I saw and the courage and endurance they displayed. The character traits that enable them to endure those impossible situations are also the character traits that keep them from healing in the aftermath: Willingness to endure suffering, reluctance to complain or show weakness, calm demeanor in the face of adversity and pain. They don’t seek a victim mantle, they are stoic, stiff-lipped and quiet.

I’ve always felt like I didn’t do enough for them while I was downrange, if I can do a bit more with this book then I’ve won a small victory.

If you could serve with any of your characters who would it be and why?

I wouldn’t mind spending some time with my New Zealand SAS trio. They have a worldview that comports with mine, or perhaps what I wish mine was. If you’ve ever read Tennyson’s epic poem Ulysses, they are the “men who strove with Gods…and drunk delight of battle with their peers, far on the ringing plains of windy Troy.” They are demigods that have transcended the base instincts of self-preservation, doubt, and fear. They are a joy to write about, and they always bring a smile to my face. However, by transcending fear they have become powerful, and one of them drinks too deeply from the cup of power and loses his way. And for that, there must be consequences…

If you would want to avoid serving with any of your characters who would it be and why?

I would steer clear of serving with Slade as that would require too much running. Also, I’ve got a sensitive meniscus, and all the ass kicking could irritate my knee. Let’s be honest, I became a pilot for a reason; when the recruiter told me that pilots get 12 hours of mandatory rest between flights, air-conditioned bunks, and a golf cart to drive them out to the aircraft, I signed on the spot. Life with Slade would be exhausting.

If you could serve in any of the worlds you created which one would it be and why?

The first book that I wrote (unpublished) opens in the Zugspitze ski resort in the Bavarian Alps. The second book that I wrote (also unpublished) follows a band of starving German soldiers trapped in the Russian winter of 1942. Now, Into a Dark Frontier is set in the post-apocalyptic, ultra-violent wastes of failed state Africa…

I’ll take Bavarian Alps and a liter of Hefeweizen for 500 Alexs.

What are you currently working on and when do you expect it to be ready. I mean you don’t need to sleep right?

Currently, I’m working on Into a Dark Frontier, the Musical. All I can say is that it will be way better than Cats. And just like Les Mis, everybody dies.

Just kidding. I’m busy working on the sequel to Into a Dark Frontier, and it’s giving me a good feeling, a really good feeling. I know how the story ends, but how I get there is still up in the air.

If this convinced you to find out more, look up John Mangan.  I hope you all had a great time getting to know about John Mangan.  Don’t be afraid to say hello here or on his website.  If he doesn’t respond quick enough, ask him if he’s English!  Mwahahaha!!  That’s always a way to anger a Scottish warrior!