Hey Space Cadets, here is the next installment in my series of book reviews. This time I’m reviewing some short stories. Some of these will be outside of my normal reading genres, as I seek to broaden my horizons. However, I will also review stories solidly in my wheelhouse, never fear! And I won’t rate those I don’t like below a 3 Grenade because it isn’t the authors’ fault that someone other than their target demographic read the work in question. I’ve nothing special to report, so let’s get right to it! 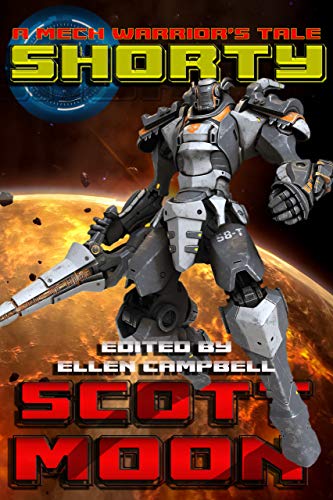 This story was an iconic tale of the underdog warrior fighting the world, on his terms. We see Shorty as the embodiment of the old maxim that bravery isn’t built, it’s forged. The mech jockey fights on a planet plagued by perpetual war, where a mech is a prerequisite for survival. On that planet there is one simple rule: be bigger than the other guy or get your ass kicked.

But at just seventeen measly tons, Shorty doesn’t measure up. His enemies can level cities and punch holes through mountains. They can reshape the world on a whim. They wouldn’t be caught dead in an overgrown trashcan like Shorty. But Shorty isn’t interested in the rule of size. He knows heart isn’t measured in pounds of steel. Bravery isn’t found in the finest machined parts. Glory isn’t just for giants. In this expansive story, we learn Shorty’s new rule, one he’s about to teach it to everyone… ass-kicking doesn’t have a size requirement.

I know this seems like a short summary, but hey… it’s a short story!

The main character, Chandler Michael Dane III, is a warrior who fights in an understrength and undersized mech. But nobody calls him that, everyone calls Chandler by his nickname and call sign, “Shorty.” He’s an average guy in a below average mech that he fought like it was bigger than the biggest Goliath. He’s the best kind of mech jockey, one who becomes so in tune with his machine that they become indistinguishable from each other. He’s obsessed with his eyes in the sky, Sexy Danielle, who he risks everything to rescue. We also meet his sisters, the twins Stacy and Sheila. And despite the length of this story, we really connect to all four of these people in a way that leaves us wanting more.

The basic plot is about a mech jockey raiding the Foxtrot Foundry for parts that he could salvage. He’s hoping to make resupply run, stealing the parts he needs to keep him in the merc game. During his time there, he makes some surprising discoveries and changes the course of the battles that rage across Doomsday. The basic plot of this story was fun, it was fast paced, and it kept me engaged. I didn’t have any trouble following this epic romp through mech country, so here the author accomplished his goals as a storyteller!

There was a lot of world building in this short story, setting up a universe where humanity is thriving post-Terra. There were a lot of acronyms for the various political polities, but Scott Moon made it so seamless that it blended into the larger backdrop of the world. This short story set the scene for a larger universe that left you wanting more. I could buy the premise of an underdog mech jockey bucking the conventional thinking on mechanized warfare so I would say that here the author accomplished his goals.

The author was lighter on descriptions than I would prefer, but it was never so sparse that I couldn’t picture the action. I feel like the amount of description was just about right for a short story. If or when Scott Moon makes this a novel, I’ll expect more so I can better visualize it all. Where the author truly shows was his description of Doomsday, the setting of this adventure. I was able to form a picture of the setting in my mind. This was not the case with the mech warriors, but those battle robots are so iconic everyone can imagine something. For a short story, it was enough.

Since I’ve been mentioning the covers in every single review, I decided to make that a part of the format going forward. As usual, a disclaimer that I’m colorblind so your mileage may vary. The cover designer kept a very minimalist concept for this short story. It definitely worked, and the “wow factor” wasn’t lost in the process. There is a gorgeous mechanized warrior in the cover, hovering over a planet with some meteors flying into it. It was a photomanipulation image, but on this cover it worked for me. The first thing that jumped out at me was the typography used, it had a very science fiction vibe. The blocky text spoke to me, I seriously enjoyed it. Paying more attention to those little details, we see that the cover designer chose to use two separate colors for the typeface so that it popped against the background. They contrasted nicely, I’m truly a fan of how it came out. Overall, I loved this simplistic cover and can’t wait to see what they do for the rest of this series!

I absolutely loved this short story! I don’t normally go for mech fiction, but this short story showed me the error of my ways! I found Scott’s prose to be easy to read, written in a way to keep the story entertaining and prevent it from lagging. I only found one typo, which I’d probably have missed if I wasn’t reading it with the intention of reviewing the story. As for the story itself, I found the basic premise to be highly entertaining. Scott Moon used several creative tactics for the main character to accomplish his goals, despite the odds. He did it in ways that were entirely believable within the context of the world he created. We see the smaller mech using hit and run tactics that emphasize speed and surprise, perfect for an understrength fighter. Scott used these creative measures to build tension and keep the story moving in a way that was highly entertaining.

In conclusion, I would recommend this story to everyone who loves fun science fiction and give it 5 out of 5 grenades. But don’t take my word for it… if this book sounds like it’s right up your alley, check it out!