Hey Space Cadets, here is the next installment in my series of book reviews. This time I’m reviewing some short stories outside of my normal reading genres, just to broaden my horizons. I won’t rate those I don’t like below a 3 Grenade because it isn’t the authors’ fault that someone other than their target demographic read the work in question. I’ve nothing special to report, so let’s get right to it! 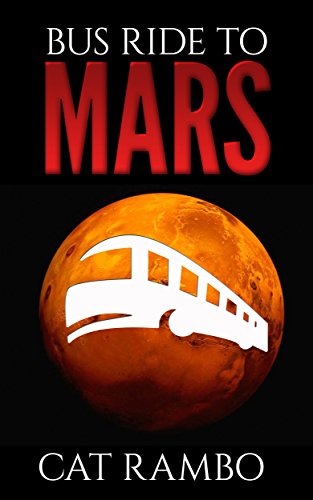 In this short story, one of the masters of the speculative fiction story takes on both Geoffrey Chaucer and the afterlife. Join Djuna for a journey that will take her through the corners of the human imagination and farther, to Paradise, Mars.

I know this seems like a short summary, but hey… it’s a short story!

The main character, Djuna, is a woman who’s over 50 years old and on a ride to Paradise, Mars. We never really learn much about her, she instead serves as a vehicle for us to observe the other characters on the bus ride. Because of how she was portrayed, lacking any real personality, I found her to be entirely forgettable. We never really got a description of her, aside from one-line mention about her age. As a result of this, I didn’t form any attachment, positive or negative, to this character. This all culminated in a character that was just there, not really believable or sympathetic certainly not well-rounded. Instead, she was an empty vessel to observe the world in which the story existed.

The basic plot is about an old woman taking a bus trip to the afterlife, which is conveniently located on Mars. There wasn’t much in the way of action, or plot, the story was instead just a series of mini character vignettes about the other bus passengers. The story was easy to follow, however, because it was organized by the days of the trip. The excursion to Mars took five days, and each day served as a chapter for the short story. The whole tale lacked any real action, so this was hard for me to describe in greater detail. There was no plot, other than the trip to Mars. I guess you could say that the premise was the plot?

There wasn’t a lot of world-building, as this seems to be set in modern times with a smidge of ancient Greek mythological references thrown in. I could buy the premise of a passenger bus to Mars so I would say that here the author accomplished her goals. I could envision the cheap 1950’s Greyhound bus vibe, so here Cat Rambo showed a genuine skill at crafting a story.

The author was very light on descriptions, leaving me feeling like the entire adventure was a series of floating heads against the backdrop of a 1950s Greyhound bus. Mostly, the description was limited to describing the food, but the main character ate. I didn’t know what most of those delicacies were and didn’t care enough to bother looking it up. Where came to the other people on the bus, they were just a series of floating heads, but the narrator was telling us about. There were so many of them floating in and out of the story, but the author didn’t have time to elaborate because of the limitations of short story size requirements.

Since I’ve been mentioning the covers in every single review, I decided to make that a part of the format going forward. As usual, a disclaimer that I’m colorblind so your mileage may vary. The cover designer kept a very minimalist concept for this short story. I think it worked, nothing that wowed you, but it wasn’t crap either. The first thing that jumped out at me was the typography used. The cover designer chose to use two separate colors for the typeface and set it against a flat black background. They contrasted nicely, Spartan, but functional. Centered in the middle of the cover was the red planet itself, Mars. Superimposed over the image of Mars was a silhouette of a white bus. Overall, the cover was simple, and that didn’t speak to me, but my wife loved it.

I wasn’t a huge fan of this short story, but this isn’t my normal genre. It reminded me of all the literary stuff I was forced to read in college, the stuff that made me hate reading for a while. However, I know that there are people who love literary fiction, so I don’t blame the author for this. But now that my bias is out of the way let’s dig into the story. I found the prose were overly complicated, to the point where I had to re-read several sentences to interpret the meaning. This was a pain, it drew me out of the story and made it less enjoyable. There were lots of commas and unnecessary subordinate clauses. The formatting was weird, with some of the descriptions of the bus driver was listed as a bullet point. If this was intentionally done, whatever effect it was going for was lost on me. Looks like a place where she meant to fill in the story and forgot to come back too. There were a few typos, where the wrong homophone was used. Generally, this story felt like a collection of character vignettes with no real plot. It was boring and didn’t feel like a real story. But again, I wouldn’t normally read this style of prose so your mileage may vary. So, in conclusion, I wouldn’t recommend this story and can only give it 3 out of 5 grenades. I’m raising my rating to 3 because it isn’t the author’s fault that I’m reading off genre for this podcast. But don’t take my word for it… if this book sounds like it’s right up your alley, check it out!