Hey Space Cadets, here is another installment in my series of book reviews. This time I’m reviewing some short stories. Some of these will be outside of my normal reading genres, as I seek to broaden my horizons. However, I will also still review stories solidly in my wheelhouse, never fear! And I won’t rate those I don’t like below a 3 Grenade because it isn’t the authors’ fault that someone other than their target demographic read the work in question. I’ve nothing special to report, so let’s get right to it! 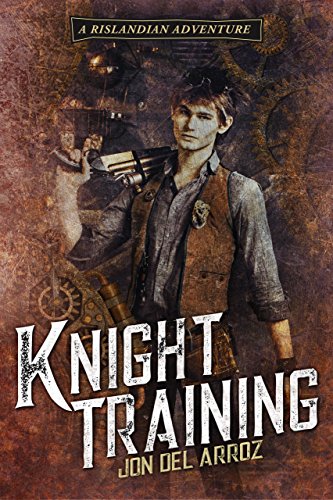 The Special Forces of Steampunk! That’s what you get from The Knights of the Crystal Spire. Oh, and airships, guns, and gadgets! These knights are more than ordinary fantasy knights. During this tale of adventure, we meet James Gentry, an apprentice in training to be a master knight. Life as an apprentice knight hasn’t been easy on James, a commoner and an outsider among the ranks of his noble peers. He’s been ridiculed, picked on, and shunned by the other boys. But he’s determined to become one of the finest knights Rislandia has ever seen.

During his training, James stumbles upon a master knight selling information on Rislandian troop movements to a Wyranth spy. To keep Rislandia safe, he must root out the traitor and put a stop to the enemy’s schemes. Does he have what it takes? Read this action-packed steampunk novelette to find out!

I know this seems like a short summary, but hey… it’s a short novelette!

The main character, James Gentry, is a survivor who wants to become a warrior to avenge his family. At first, he comes across as a Mary Sue, but Jon Del Arroz neatly avoids this label by showing James working harder than everyone else in his determined bid to become a Journeyman Knight so he can get into the war against the Wyranth Army. He’s driven to prevent other peaceful Rislandian villages from being destroyed like he had been. A hero rising from the ashes of his or her ruined family is a standard trope, but in this Del Arroz pulls it off. I found that I did like this character, I could relate to his quest for vengeance and desire to serve his family. Surprisingly, given that this was only a novelette, James Gentry was a well-rounded character. We also met James’ childhood beau, Zair-bear and his current romantic interest, Princess Reina. Those characters are given just enough personality to make them likable. Despite the length of this story, we really connected to all three of these people in a way that leaves us wanting more.

The basic plot is about a warrior in training trying to avenge his family through service to his king. During this training, James Gentry stumbles upon a brother knight selling out the Rislandian Army to their enemy. Not one to leave things well enough alone, James follows the spies and foils their efforts to destroy their kingdom from within. This story was a bit of a slow burn, but once I got going, I was hooked. It was fun and kept me interested throughout the rest of the adventure. I did have a little bit of trouble following this tale of intrigue, mostly because it felt like I was dropped into the middle of a series, instead of reading book one of a new one. I think that this series would make more sense if I’d read the main series first, but I was familiar enough with fantasy and steampunk to follow along. Here the author accomplished his goals as a storyteller!

There was a lot of world building in this short novelette, setting up a steampunk universe. I felt like I missed a lot of the references because this story referenced the other series so much, but once I got into it, I could follow along. The author, Jon Del Arroz, went lite on some of the worldbuilding, but I was able to fill in the blanks on my own. There were a lot of callbacks to The Adventures of Baron Von Monocle, but those ceased to be a huge issue as I got more into the story. This novelette set the scene for a larger universe that left me wanting more. I could buy the premise of a knight in training rising up from the peasant classes so I would say that here the author accomplished his goals.

The author was lighter on descriptions than I would prefer, but it was never so sparse that I couldn’t picture the action. I feel like the amount of description was just about right for a novelette. If or when Jon Del Arroz makes this a novel, I’ll expect more so I can better visualize it all. Where the author truly shone was his description of the life of a knight apprentice. This descriptive skill saved him in the worldbuilding category and really sold Rislandia to me. I was able to form a picture of the setting in my mind, though partly because I’ve served in the Army and there are some universal truths about life in the barracks. This was not the case with the guns his soldiers used, but this could be because I’m relatively new to steampunk. I could picture the swords, I could imagine the dirigibles or airships, but guns seemed odd to me. I did like how Jon described the rookies apprentice being shocked at the recoil, it was a nice touch, but I found myself picturing standard historic black powder rifles instead of these weird steampunk ones. Despite this minor complaint, for a novelette, it was enough. Jon Del Arroz proved his literary chops with this category, but now I’ll expect a lot when I transition into reading his full novels.

Since I’ve been mentioning the covers in every single review, I decided to make that a part of the format going forward. As usual, a disclaimer that I’m colorblind so your mileage may vary. The cover designer stayed true to the steampunk aesthetic, creating an effect of the image being painted onto leather with the cover model surrounded by gears and cogs that fit into this unique subgenre of science fiction. I couldn’t see any of that, being colorblind, but my wife thought the image needed more contrast with the color scheme. The first thing that jumped out at me was the typography used, it had a steampunk vibe, one that evokes images of giant machines and the age of steam. The blocky text spoke to me, I seriously enjoyed it. Maybe because it was all I could see? Overall, I can’t fairly judge this one other than to say that it had a pretty font!

I absolutely loved this novelette! I don’t normally go for steampunk, but this story left me wanting more! I’m not quite at the level of wearing those fancy outfits you see at comic cons, but I definitely enjoyed this fun romp in an airship universe! I found Jon’s prose to be easy to read, though it was a tad clunky at first. Once the story grabbed me, I stopped noticing any of those pesky details. It was written in a way to keep the story entertaining and prevent it from lagging. As for the story itself, I found the basic premise to be highly entertaining. My only real complaint was that I was a bit lost in the beginning, it felt like I was jumping into the middle of something, instead of starting at book one. I also felt like this plot line would be better served had it been expanded into a full-length novel, but otherwise, I couldn’t find anything worth whining about! Jon Del Arroz crafted a perfect blend of evocative imagery and an imaginative universe that made me want to know more. More importantly, this story was the perfect ambassador to the steampunk genre writ large! The author’s passion for the genre shines throughout the entire story, it practically drips off of the page. Jon used his love for all things steam-powered to tell a fun spy story, building tension and keeping the story moving in a highly entertaining way. In conclusion, I would recommend this story to everyone who loves fun science fiction and give it 4 out of 5 grenades. But don’t take my word for it… if this book sounds like it’s right up your alley, check it out!