Hey Space Cadets, here is the next installment in my series of book reviews. I wish I had a lot to tell you, update wise, but I’m busy diving into writing my next novel. Instead, here’s a look at what I’ve been reading on my daily walks. In order to streamline the review process and make writing them less onerous, I have tried a more abbreviated format. Please be sure to share your thoughts on this change, and we can adjust fire going forward. 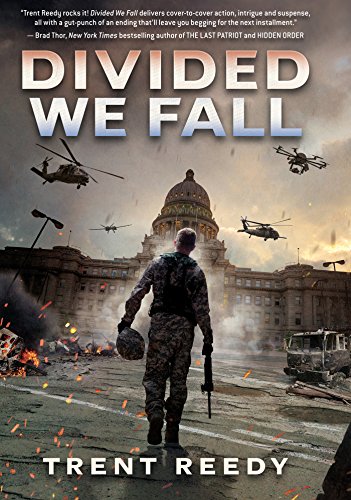 Danny Wright never thought he’d be the man to bring down the United States of America. In fact, he enlisted in the Idaho National Guard because he wanted to serve his country the way his father did. When the Guard is called upon the governor’s orders to police a protest in Boise, it seems like a routine crowd-control mission … but then Danny’s gun misfires, spooking the other soldiers and the already fractious crowd, and by the time the smoke clears, twelve people are dead.

The president wants the soldiers arrested. The governor swears to protect them. And as tensions build on both sides, the conflict slowly escalates toward the unthinkable: a second American civil war.

With political questions that are popular in American culture yet rare in YA fiction, and a provocative plot that asks what happens when the states are no longer united, Divided We Fall is Trent Reedy’s very timely YA debut.

I had a few major complaints about this novel. The constant use of the word “assault rifle” by military personnel who were supposedly highly trained was annoying. That’s not a term I’ve ever heard used by anyone with training in firearms. Mostly, that term is used in political circles and has little to no actual meaning other than to tell you the person isn’t literate in firearms. Secondly, I didn’t like the amount of time spent addressing sexual issues by the main character. I don’t mind that in my books, but not when the protagonist isn’t a legal adult. This really bugs me, but not enough to stop reading. While I didn’t stop reading, this really bugged me because the book is supposedly for children, and that is the section where you find it in Barnes & Nobel. This is most certainly not a children’s book; the amount of swearing and graphic violence is certainly for mature audiences only. Another one of my complaints about this book was the premise for the flashpoint of the civil war in question. The whole nation is up in arms about a government ID card that could track your movement; however, everyone in this novel has a “comm,” which already does that.

Further, the government has already been shown to repeatedly violate civil liberties. How can any character in this book believe that this isn’t already happening? Finally, I didn’t like the way the audiobook was done as a stage play. I prefer the standard read, without all of the sound effects. I find those to be annoying, but not enough to turn off the audiobook. I know that my audio complaint is mostly an issue of my own personal taste, but I figured I’d throw it in there!

The author was strongest in his creation of a narrative that was both compelling and believable. The scenario in this book was so convincing that it was scary. Seriously, it was one of those stories that won’t let you stop thinking about it. Sure, there were flaws with the flashpoint, but the author covered some of those with the bland “tensions were high about a lot of things.” The world-building was also top-notch, but that’s easy to do when writing in near-future America. We all already have our own cultural images of home that we bring in the story, making the author’s job a little easier. The use of news updates as a way to push the narrative was also a fun touch and one that Trent Reedy didn’t overuse. While there are parts of the story that wasn’t flush out as well as I would’ve liked, it fits within the scope of young adult literature. Finally, the biggest pro for this book is its emotional resonance. As the main character, Danny Wright learned to hate his country, we did as well. It was hard to remember sometimes of this restriction, and not my America.

I’m really torn on my overall thoughts. I wanted to like it, the themes in question were “what if” scenarios that anyone who studied the Civil War or water uniform has thought about. However, there were parts that I hated because the characters make stupid decisions, the angst felt overdone or the military culture seemed off. And yet… I couldn’t put it down. And now I’m reading book two. The author made you care too much, which is a mixed bag for me. I certainly empathized with the main character, Danny Wright. I learned to hate as he hated, which is my biggest ick factor because the bad guy is an overbearing Federal Government. I hated that he made America the bad guy because that’s what we get too much of on TV already. And just because I’m being nitpicky, there was a typo on the Amazon blurb. But in the end, the author’s ability to make me keep reading was the deciding factor. When that was combined with a premise that I’ve spent too much time thinking about throughout the course of my academic studies, you have a recipe for a gripping novel. Overall, I give this book 4 out of 5 grenades and your assurances that I will read the next book in the trilogy.