Hey Space Cadets, here is the next installment in my series of book reviews. I wish I had a lot to tell you, update wise, but I’m busy diving into writing my next novel. Instead, here’s a look at what I’ve been reading on my daily walks. To streamline the review process and make writing them less onerous, I have tried a more abbreviated format. Please be sure to share your thoughts on this change, and we can adjust fire going forward. 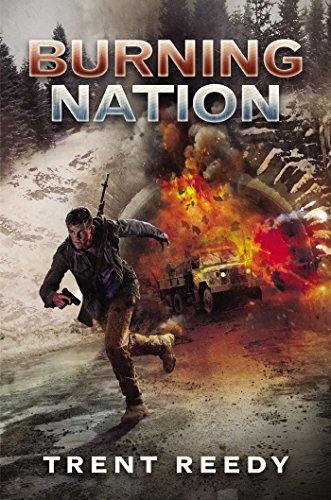 At the end of Divided We Fall, Danny Wright’s beloved Idaho had been invaded by the federal government, their electricity shut off, their rights suspended. Danny goes into hiding with his friends in order to remain free. But after the state declares itself a Republic, Idaho rises to fight in a second American Civil War, and Danny is right in the center of the action, running guerrilla missions with his fellow soldiers to break the Federal occupation. Yet what at first seems like a straightforward battle against governmental repression quickly grows more complicated, as more states secede, more people die, and Danny discovers the true nature of some of his new allies.

Chilling, powerful, and all too plausible, Burning Nation further establishes Trent Reedy as a provocative new voice in YA fiction.

I had a few major complaints about this novel. The constant use of foul language in a book that was supposedly for a young adult audience bugged me. I read this book in preparation for letting my 13-year-old son dive in. It’ll be a hard pass for me, he doesn’t need any further exposure to the levels of vulgarity. Secondly, like with the first book (Divided We Fall), I didn’t like the amount of time spent addressing sexual issues by the main character. I don’t mind that in my books, but not when the protagonist isn’t a legal adult in a book geared at my kids. This really bugs me, but not enough to stop reading. This is most certainly not a children’s book; the amount of swearing and graphic violence is certainly for mature audiences only. Speaking of the violence, I felt like the combat scenes in this novel was a tad repetitive, especially when asymmetrical warfare has plenty of opportunities from insurgent warfare, I saw plenty of it in Iraq, and the author would’ve experienced it when he deployed to Afghanistan. He could’ve done more to stop the fighting from being samey. I had other issues with the story itself as well. I felt like the angst coming from the main character, Danny Wright, was overdone. I don’t mind that it was there, just that it felt like it dragged the story down in the middle of an action scene. Speaking of characters, I had a lot of issues where there was a floating head syndrome, where I couldn’t visualize the setting and characters. The author went light on some of the descriptions, but that’s a personal choice for me, I like the details. Paint me a picture, I’ll love you for it. Oh, and the cliffhanger ending, ugh. Glad I read these years after they were published, so I wasn’t left hanging for a year with a partial story. Finally, I didn’t like the way the audiobook was done as a stage play. I prefer the standard read, without all of the sound effects. I find those to be annoying, but not enough to turn off the audiobook. I know that my audio complaint is mostly an issue of my own personal taste, but I figured I’d throw it in there!

The author was strongest in his creation of a narrative that was both compelling and believable. He took what he’d started in Divided We Fall and kicked it up a notch. The scenario in this book was so convincing that it was scary. We saw what the reality of a second civil war would look like. This is an important thing to consider in a society so divided by chuckleheads on both sides who think that this is what they want to get there way politically. It’ll be ugly and deadly, and the world should recognize this. Because of how he set this scenario, the novel was one tale that wouldn’t let you stop thinking about it. Especially when he showcases the aftermath of modern warfare between two highly advanced armies in an increasingly realistic manner. As a part of that, we see the real consequences of combat on the modern psyche. Only a sociopath can walk away from killing unscathed, I am glad that Trent Reedy didn’t gloss over it. Seriously, those details matter. After the first novel, the author improved some aspects of his world-building. It was also top-notch, but that’s easy to do when writing in near-future America. We all already have our own cultural images of home that we bring in the story, making the author’s job a little easier. The continued use of news updates and personal vignettes as a way to push the narrative was a fun touch. It could’ve been overdone, but luckily Trent Reedy didn’t. While there are parts of the story arc and plot that weren’t fleshed out as well as I would’ve liked, it fits within the scope of young adult literature. Another pro for this book was its emotional resonance. As the main character, Danny Wright learned to hate his country, we did as well. It was hard to remember sometimes of this restriction, and not my America. We saw him struggle through his love for Jobelle and how that affected his life choices throughout this novel. As a result, we got to see more of her and see her character evolve and become more complex. Speaking of characters, they all felt more complicated in this book, an expansion of where they stood in the first novel in this trilogy.

I’m really torn on my overall thoughts. In all honesty, I started this novel wanting to like it, the themes in question were “what if” scenarios that anyone who studied the Civil War or water uniform has thought about. However, there were parts that I hated because the characters make stupid decisions, the angst felt overdone or the military culture seemed off. And yet… I couldn’t put it down. And now I’m reading book three. One improvement from the last novel was how fleshed out the personalities of the main characters were. They all showed their reactions to the war that surrounded them; some became better more compassionate versions of themselves, while others embraced their more primal and animalistic side. This felt true to the fight I experienced in Iraq. I read a lot of soldier’s memoirs, from across all areas, and the way Trent Reedy portrayed the characters reacting to it fit within the broader scope of combat through the eyes of soldiers. Another place where the author really shined was in a setting he created. I could really picture what he was describing, though it helps that he set this novel in Anytown America. There was enough modern tech with the comms to make this story futuristic, but Reedy left us plenty of anchors to the contemporary world, so we felt grounded. We have weapon systems that haven’t changed, so I was very familiar with them. The vehicles described were ones we would recognize, the usual mix of trucks, vans, and the like. However, despite how gloriously he described the setting, he didn’t do such a good job with the characters. I still can’t visualize many of them. We know that JoBelle was a blonde, and Sweeney was Asian. That’s all that we could really say, and I prefer more. Again, I realize this is bucking the modern trends in literature, but I just don’t like that aspect of it. When it comes to details, more is always better. Hello Brandon Sanderson, I’m winking at you! One point that I didn’t like was how mature this story was, given that it was marketed as a YA novel. However, it didn’t feel fully adult either because it tried to walk a tight rope between adult content and books for juveniles. The torture, killing, murder, and sex scenes were too much for my kids, who are the target demographics, and not enough for what I’d expect from an adult novel. Seriously, I wouldn’t want my kid to read that torture seen. But let’s not be all doom and gloom, the author did a great job in portraying the personalities of the characters. All of their actions felt true to the people he created, which is a plus. Another aspect that I liked about this novel was how Trent wove in larger themes; good versus evil, the nature of war, exploring what our shared humanity even means in a post-government society. There were many more that I didn’t list, but I’m working on more concise book reviews. I didn’t mention this in my last review, but I really loved the covers of this novel. The image was evocative of everything that was contained within the pages, which is precisely what you want. But more than that, it was just a gorgeous piece of artwork. While there were parts that I didn’t like, in the end, the author’s ability to make we keep reading was the deciding factor. When combined with a premise that I’ve spent too much time thinking about throughout my academic studies, you have a recipe for a gripping novel. Overall, I give this book 4 out of 5 grenades and your assurances that I will read the final book in the trilogy.

Until next time, stay frosty, and don’t forget to keep your powder dry!