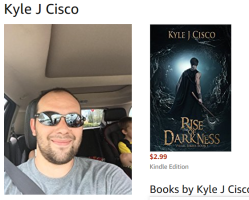 Hello, Space Cadets! Today, I wanted to introduce you to another author from my WARRIOR WEEKEND INTERVIEW SERIES. Kyle is an Air Force Veteran, a husband, father, a student, and now an Author. When he isn’t slaving away at the keyboard creating fantasy worlds. You can usually find him reading a good book at the pool with his kids, or working on the next short fiction piece for his portfolio. When Kyle got out of the military, he moved from New Jersey to Florida in the hope he would never see snow again. Never one to settle for okay when he could be exceptional, he began attending Full Sail University to gain an MFA in Creative Writing. His hobbies include reading, writing, and getting walked by his German shepherd Eddy all over the neighborhood in the wee hours of the night. Recently Kyle had a flash fiction piece accepted to Down in the Dirt Magazine, the piece will be featured in the Jan 2018 issue of the Magazine.

Well, I entered service in 2010 with the USAF, as an aerospace maintenance technician. I was stationed in Elmendorf, AK for my first three years. While there in 2012 was sent to Kandahar, Afghanistan. After that eye-opening experience, I met the woman of my dreams and got married had a few kids. Then was moved back to good old New Jersey, where I was originally from. To work out of McGuire AFB, where I finished my service after being diagnosed with PTSD, and a degenerative spine arthritis.

I would say it influences my writing in a minimal fashion right now. Only due to the genre I am writing in right now. Heroic fantasy doesn’t lend itself well to plane mechanics. However, I have used my knowledge of rank structure along with other strategies and tactics I learned from my time in the military, and the study of military history.

It all started getting more serious after I got out and went back to school. I was wondering what to do now that I have done the only job I ever wanted to do. I had always been into writing, and have been writing all sorts of stories since I was about 14, so it was a logical choice for me. 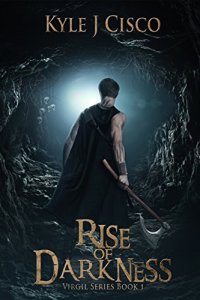 I would have to say my favorite work is the first book in my Virgil Series: Rise of Darkness. This being that is was the first manuscript I made it all the way through, and it was an idea I had been world building for about three years. Although it was watching Chris Fox’s 21-day novel challenge that got me to the finish line. Once I saw those videos I decided I was going to write my first draft in 20 days, and spoilers I did it!

There are a ton. The wonderful thing about being in the military is the wide breadth of people you get to meet from all walks of life. It’s been a great place to pick characteristics from individuals that I admired or didn’t care for and use those traits in the characters I write.

How many of the specific scenes you wrote were inspired by your service?

When I first started going back to school my first short story I wrote was directly based on some of my experiences while I was overseas. I am sure there are some scenes in the fantasy books I write that relate to some of my experiences, but I think that is more on the subconscious level.

Do you feel like your writing has served any therapeutic value for you?

Has it helped you process your military experiences? Without a doubt. It is an outlet for me to voice the various inner stuff I am dealing with at the time. It helps me work through issues I am experiencing in real life by doing so with characters in a fantasy world.

I think it would be my second POV character in Rise of Darkness Evon. He is the tough, grizzled vet that I would want in the trenches with me in a fight.

I honestly think I would serve with most of them, only because they resemble people I have served with in different aspects of personality and such.

If you could serve in any of the worlds you created, which one would it be, and why?

It would be in the world I have created for the Virgil series. This is not because it was the only world I have built thus far, but also because It is a place modeled after medieval eastern Europe, an area of the real world I have always wanted to learn more about and go see.

Can you tell us how all of that has lent itself to your most upcoming release?

Well, my most recent release is Book One in the Virgil Series, Rise of Darkness. This is my first full length novel published, and it is a great mix between game of thrones, and lord of the rings, with a bit of Slavic mythology, sprinkled on the top. I also have a new short story available as well, “The Northman’s Ambition” is a prequel to the next series of books I am planning after completing the Virgil Series.

And since you’ve finished that novel, what are you currently working on and when do you expect it to be ready for publication?  I mean, you don’t need sleep right?

Well, my next project is Book Three of the Virgil Series, as well as a second series of novels that takes place within a different world that harkens back to the origins of Sword and Sorcery. The Northman’s Ambition is the prequel to this series.

If this convinced you to find out more, look up Kyle J Cisco.  I hope you all had a great time getting to know him. Don’t be afraid to say hello here or on his website.  If he doesn’t respond quick enough, ask him if he’s ready for a promotion into the Army!!  Mwahahaha!!