Hey Space Cadets, I’m doing well and working on the world building for my own universe!  I’ve hired an artist for cover art, and started designing all the things that flesh out a literary world. I’ll have more information as we get deeper into the process but for now lets talk about some epic science fiction novels!  Without further ado, here is the next installment in my series of book reviews.  This time, we dive back into the worlds at the Galaxy’s Edge!

Obtained:  I bought bought this from Audible with one of my credits 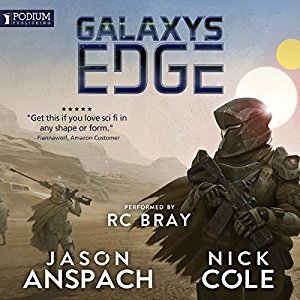 First, let me say that none of what I’ll say in this section couldn’t be found on the back copy of the novel.  Heck, I cribbed this summary from the back, and then I add my own twist!  And not even much of one, since most of the books I read have kick butt descriptions (aka blurbs).  If the blurb doesn’t catch my eye, then I tend to skip the book unless a friend recommends it.  Generally speaking, my goal is to provide a spoiler free review, so here goes nothing!

On the edge of the galaxy, a diplomatic mission to an alien planet takes a turn when the Legionnaires, an elite special fighting force, find themselves ambushed and stranded behind enemy lines. They struggle to survive under siege, waiting on a rescue that might never come.

In the seedy starport of Ackabar, a young girl searches the crime-ridden gutters to avenge her father’s murder; not far away, a double-dealing legionnaire-turned-smuggler hunts an epic payday; and somewhere along the outer galaxy, a mysterious bounty hunter lies in wait.

Galaxy’s Edge combines sleek starfighters, exotic aliens, loyal bots, blasters, scoundrels, heroes, and powerful enemies in a thrilling adventure that will take you back to that magic place from a long time ago.

If you like epic space opera, with a side of military science fiction, you should read this series.  Plenty of explosions, with authentically gritty combat.  If this sounds like your flavor of badassery, then you’ve come to the right place!  This novel is a brilliant introduction to the Galaxy’s Edge Universe, where they fix everything George Lucas broke in this Star-Wars-Not-Star-Wars adventure.  I wish I could give you an easy comparison, if you enjoyed Book X, buy this book but I really feel like Nick and Jason broke new ground here.  They’ve revived that sense of newness and fun that we loved as children, that brought most of us to the science fiction genre!  There are other military sci-fi books out there, but none quite like this!

This is my first exposure to narrator R.C. Bray and I was impressed. This audiobook was excellently executed, and he was the perfect person for this novel. He didn’t bore you, or make you zone out because of his monotone. His performance didn’t feel robotic, like a machine was reading the novel too me.  Instead, it felt visceral, and for a second I was back on the Route Irish, dodging IEDs, just trying to live another day. I give Bray a 5 out of 5 grenades for his performance.

“Got 10 min into this and felt like I was back with the boys in Anbar! Awesome!” ~ Logan Scott

“I’ve been waiting for this book for MONTHS. The story sucks you in with the first line and never lets up even if you try to tap out. Great story, great performance, and I’m ready to pre-order the next one. You get 2 books for the price of 1 credit, so stop standing around reading this review and buy it already.”  ~ Kevin G. Summers

“The wonder of the Star Wars universe has been resplendently recaptured for me in the form of this novel. Surprises, adventure, excitement, spectacle, and thrills are all woven together here. This is all the elements of Star Wars mixed together in a brand new and refreshing way to bring you a scintillating tale of a galaxy in turmoil and those who are trying to make their way through it, trying to survive another day. I look forward to the sequel and to more stories set in this universe. Pew pew!” ~ Chris Fried

“Loves hearing the story again! Wow, reading the book was (of course) amazing. I am really glad that the authors snagged a professional audiobook outfit to bring the first two books to audio life. You’re gonna love it. RC Bray does fantastic work!” by Ecualegacy

I really loved this audiobook, it was a lot of fun to listen too.  It brought back the epic space romps I read and loved as a kid. This audiobook contained [Legionnaire] and [Galactic Outlaw] which I’ve previously reviewed. My thoughts on Legionnaire are here and my thoughts on Galactic Outlaw can be found here. This double pack of audio awesomeness was a lot of fun to listen too, and I couldn’t recommend it more! There were no deep messages, or political themes, just good clean fun. The story was compelling and reminded me why I wanted to join the Legion in the first place. Let’s be real, my fighting days are over, but I could forget that while I read this book. That’s a dual edge sword though, I had to stop some because it brought on flashbacks of my time in the deserts of Iraq. The narrator painted a visceral emotional picture in ways that the plain text hadn’t. But for a second I could be young and spry again, capable of chewing lead, spitting out bullets and walking through fire.  Definitely gave me a case of the feels, and I found myself wanting to be a part of it all. I was reminded of why I started the Galaxy’s Edge Facebook Fanclub, of what I loved about this Star Wars-esq universe. I don’t want to come on too strong, but I love this series and this audiobook.  It’s right up there with Terry Mixon’s The Empire of Bones

series for me.  Maybe there’s just something about a few old Army guys telling stories that I love?

The first thing that caught my eye was the fantastic cover, it was amazingly compelling. It was different from the two books that are contained in this audiobook. Seriously, if I weren’t color blind and art dumb, I’d add a section to these review template on the covers because so many of them are kicking butt these days!  I know I said this about Scott Bartlett’s cover too, but the caliber of covers is certainly improving, and this book just kicks Awesome up a notch!  They reminded me of the fun comic images I loved, or movie posters from the action adventures I read when I was supposed to be studying.  When I finally have a dedicated office or man cave, I’m decorating it with these covers!  And whenever they sell swag, that too!

Seriously, I realize I’ve gone full fanboy, but the authors have definitely raised the bar for military science fiction authors everywhere. And RC Bray, wow! Totally Bro-Crush on this cat, I’ll be listening to any of the other science fiction he narrates. Basically, Bray had me hooked from the beginning and kept it going throughout the whole novel. This is a book I would happily recommend, and an author I will definitely read again.  Buy the novel!  But hey, it’s easy to spend someone else’s money!  I give this novel a 5 out of 5 grenades!  If it weren’t cheating, I’d give it 6 grenades!

If this audiobook sounds like it’s right up your alley, check it out, you won’t regret it!  Well, unless it inspired you to serve the Legion.  And you enlist, get kitted up, only to realize that your armor is made of wax paper.  Then you’re put on the front lines, getting to be on the tip of the spear.  In your first fire fight, you’ll realize that the pretty uniforms won’t save you.  And then the other shoe drops, you figure out that the weapons aren’t calibrated, and you can’t hit the broad side of a barn.  But, alas, every rebel scum is a crack shot.  Well yeah, I guess this could be bad for you.  Or maybe you’ll be okay?  I mean, you could be the first trooper to make it out alive?  On second thought, be warned, fanboy/fangirl syndrome just MIGHT kill you.  Be wary, you were warned and if you have to go out like that at least enjoy the view from the end times! 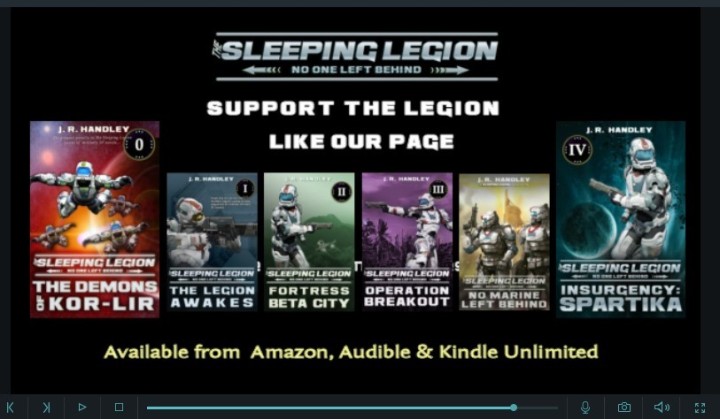