Hello Space Cadet, today I wanted to muse about some parts of my time in the Big Green Weenie.  It inspired this post, as I tackle the role that cadences and martial music in the development of military culture and mores. I hope you enjoy my ramblings, feel free to join the conversation afterwards! Without further ado, let the ramblings begin.

Everyone who has ever served in the military knows a universal truth: the value of music. You’re taught to march through music. Yes, I know they stopped using marching bands to train with years ago. Yes, I’m also aware that they don’t even have lone buglers or drummers leading the charge. However, modern troops are all taught to march via the musical stylings of our drill sergeants or petty officers. And for the Air Force, maybe their butler? Am I showing my age by remembering when drill sergeants were still scary SOBs who made your life a living hell for 22 weeks? Anyway, I won’t let on that I know your age (spies be spying yo) if you let me pretend that all of the smart kids went Army! Hey, it keeps it simple because I can say sergeant instead of remembering petty officers and whatever the heck the Coasties and the Air Force had.

Think back, dust off that fuzzy sounding eight-track and start running through your memories. Do you remember them? The marching cadences used to keep you in step? The sing-songy sound of your sergeant’s bellow? Something about yellow ribbons, Chuck Norris and ladies in multi-colored dresses. I had the rare privilege of having seen these cadences at all levels, the ones used for boot recruits, sergeants at the NCO Academy and officers in training. Yes, I know they’ve changed the name of the NCO school many times….  But hey, if I tried to keep current with that fiasco, I wouldn’t have time to write this wee post or work on my next novel so go with it.

Yesterday I was using music to soothe the soul of several wild animals, most notably my two children, and the music they requested from Dad’s YouTube DJ Services took me places. My eldest asked for the soothing sounds of 1990s heavy metal, though you might call it light rock today. The market really has changed that much! Guns-N-Roses, Metallica, Motley Crew….  the usual for kids these days, and if it isn’t it dang well should be. I was instantly taken back to my youth, rebellious thoughts of parental mutinies and my daring but unfulfilled plans to woo that special girl. To protect the innocent, I will call her Emily, but since I’m the writer here you’ll have to trust me when I say it isn’t important.

Anyway, after walking down the primrose path of my pubescent mental mausoleum, my eldest son’s turn was over and number two got his shot. What did he request? Ugh, he chose Army marching cadences. I know you’re asking yourself why my son might request the cool marching cadences of Hail, oh hail, oh infantry, but that’s probably not important.  Had nothing to do with daddy’s gross lack of musical depth, namely knowing zero lullabies, which led to some hypothetical person singing Army cadences to his colicky son. Hey, it was the oughts’! I mean, the double zeros excuse everything, that crazy post-Y2K time in our history.

So I kept my word, much to my wife’s chagrin, and I hit play to a few Army cadences. My ten-year-old joyfully marched in place to the sounds of unseen sergeants extolling the joys of war. “Off to battle we will go, to live or die, hell I don’t know” seemed perfectly rational when an 18-year-old Private Handley sang it on his way to the nastiest DFAC this side of Hades… but out of the mouth of my grinning cherub? I shuddered, I cringed, and my wife bopped my head! Not quite concussion territory, but dang!

Seriously, while in Iraq I watched Kentuck drink out of the Euphrates fricken River. Afterward, I shared a bottle of Gatorade and cigars with him. (Note to self: brush teeth a few extra hundred times.) I did a multitude of other gross stuff, just to fit in with my fellow grunts. Somewhere, my doppelganger is still screaming to his buddies “Hey yall, watch this!” But all that paled when listening to my sweet boy, my little buddy, sing of death and war. It shook me to the core.

I’m not one of those apologists who throw medals over political fences. I won’t say I’m sorry for fighting my country’s wars, my job was to fight. I was good at it, and many of us came home because of the skilled riflemen I had the privilege to stand shoulder-to-shoulder with. While it was my job to fight, it was my fellow citizens and the politicians they elect, whose job it was to determine when and where they unleashed the beast. Not a perfect system, but it beats the alternatives. But, unlike my Handley predecessors, I will gladly surrender the mantel of ‘military family.’ We’ve done enough, let the Jones have the ball for a few generations. My sons… I want them to be patriotic, but maybe with a slight contrarian hippy bent? A few peace signs and tie-dyed shirts to add to the effect? Maybe even a dreaded pair of Birkenstocks? For you Brits reading this, think along the line of Guy Fawkes. And if I mangle that geopolitical reference, I can blame Tim! Hey, blaming your predecessors is practically cannon over here!

Right, back on track… sorry, the wife had to beat me about the head and shoulders, so the hamsters knew I meant business. Rest easy, they are back on that spinning wheel and we’re back on course. After I got over the shock of seeing a babe singing a violent military cadence, I realized something. We modern soldiers, those raised in a more genteel time, we NEED those cadences. Why? They prepare us for the idea of death; ours and theirs. They teach us to dehumanize our enemies and make us more comfortable with the idea of killing them first. It reminds me of the quote from Karate Kid, the motto of the Cobra Kai Dojo. “Strike fast, strike hard, no mercy sir!”

One author, Lieutenant Colonel Dave Grossman, wrote a book On Killing about how the military used systematic approaches to accomplish the goal of preparing soldiers to kill and possibly die in war. Some have argued that this was a seminal book on the subject, and while I’ve not read it since my head injury, I instinctively realized how those cadences from long ago shaped my world view. I learned to hate the dreaded commie as I humped the hills of Fort Benning, GA. I learned of vaunted Airborne Rangers left dying in the mud, though I always thought Patton had it right, better let them die for their country instead. I remember fondly a cadence where the mythical soldier is asked how he earns his living, to which he replies, “blood, guts, and a whole lot of danger.” In follow-on cadences, we learn that an acceptable way to do this is with your K-bar (combat knife). To save you from hearing me give you all the examples, I’ve posted links to a few at the bottom of the article. 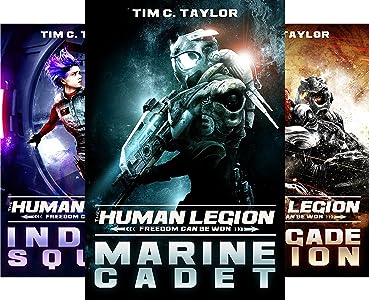 So, I’ll assume you’re still with me because otherwise, you’d have left the thread already. Now that we have shown how a largely peaceful civilian culture prepares warriors to fight and die, let us consider the world created by author Tim C. Taylor. Okay, I really do love his work, but I’ll end my fanboy stuff here, I swear. So, in the universe of Tim’s Human Legion Series there are no civilians, everyone’s a combatant. At least, the Marines in the Human Marine Corps are only exposed to militarism from birth, it’s possible that the culture of the White Knights is different… Maybe we’ll learn more in the books that follow The Battle for Earth?

Now that we’ve established the universe, how would their teachings differ from ours? Would these crèchelings/novices/cadets even need cadences to accustom them to their new reality? And what does one sing about when you have no non-martial references from which to draw upon? Who would be their mythical Jody, the bogyman who steals your girl or guy, while you’re gone when it’s likely your lover would deploy with you? And on a broader subject, how would their purely military society differ from ours? I’d bet their food would be worse, military cooks are the pits! I remember a DFAC at Fort Hunter-Ligget that even screwed up a burger! How do you mess up a burger? Ugh, but I digress. Seriously though, in what ways would daily life be different in a world free of civilians? Do they trade in their humanity in the name of efficiency? And what would such a world produce for the lullabies which we take for granted when we’re singing them to our young? What kind of fairy tales exist in this militaristic society? I won’t pretend to have any answers, but the questions are intriguing. Let’s be honest, it is what makes science fiction so great in the first place!

This was all just food for thought, a fun mental exercise. Before we wrap this up, are their other literary universes where everyone in the culture is in the military? Share them in the links and join the conversation!

–> As usual, all images came from Google’s images in the “labeled for reuse” section or are owned by JR Handley.