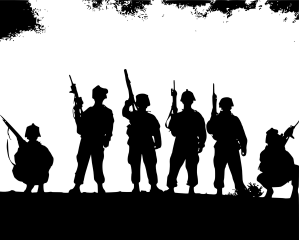 Hello Space Cadets! Things are going well, still trying to figure out how to balance the business side of writing with the creative.  How much time on the blog versus how much time writing the next dang book.  I would rather do only the writing, but if people can’t find me to read it how will I cover my editing?  Corey is an awesome editor, but he’s gotta eat too so he doesn’t work for free.  Anyway, let’s get right into today’s topic.  Another interview with a military veteran!!

Now that we’ve gotten past the pleasantries, I wanted to introduce you to another author from my WARRIOR WEEKEND INTERVIEW SERIES.  Terry Mixon is the author of The Empire of Bones Saga, The Humanity Unlimited Saga, and The Fractured Republic Saga.  He served as a non-commissioned officer in the United States Army’s 101st Airborne Division.  While he was with the ‘Screamin Eagles’ before I was, it’s all the reason I needed to dive into his books.  Boy I’m glad I did!!  He also worked alongside the flight controllers in the Mission Control Center at the NASA Johnson Space Center for almost two decades, supporting the Space Shuttle, the International Space Station, and other human spaceflight projects during his tenure there.  He lives in Texas with his lovely wife and a pounce of cats.

That’s his bio, in a nutshell. However, let me briefly tell you how I came across Terry Mixon.  I was looking for podcasts about writing and Google lead me to The Dead Robots Society Podcast.  I loved it, they were friendly, approachable and targeted authors in the Indie community.  This lead me to their Facebook group for the podcast and interacting with the wonderful community of listeners.  It’s the most helpful bunch I’ve come across, you should seriously join them as well.

Once I got active in the group, I started also peppering the co-hosts Paul E. Cooley and Terry Mixon with questions.  They both gladly answered, sharing their knowledge and paying forward their success.  Seriously, my books wouldn’t be there without his encouragement along the way.  No author operates in a vacuum and he was part of my process.

I joined the Army in the mid-80s straight out of high school.  Being from a small town and living out in the country (way out), I couldn’t wait to get out of there.  It turned out to be one of the best decisions that I’ve ever made.  Wouldn’t trade it for anything.

I served as a helicopter crew chief in the 229th Attack Helicopter Battalion working on OH-58 Scout Helicopters.  The name changed to 1/101st Aviation Regiment while I was still there, but it was still the same job working with the same people.  And who wouldn’t love working on helicopters and occasionally getting the chance for some stick time?

It’s certainly gave me some understanding into how a military group functions.  While I don’t have the same insight into other services like the Navy or the Marines, it gives me a leg up in understanding the people in those organizations think.  I can look at details, but knowing how people think is a lot harder.

I also spent a lot of time playing role-playing games in the service.  I started before I joined, but there was never any problem finding a group of people wanting to play something.  That gave me another leg up as a storyteller.

Basically, I made things up.  The same thing I do when I write.  I doubt I would’ve run into so many people doing that in so many different made-up environments if I hadn’t joined the Army.

I do.  Seeing how pilots worked together and operated certainly has influenced the way that I have ships operating in space.  When I’m fighting on the ground, the things that we were trained in certainly add to it, but I’m no infantryman.  Again, it’s all in the mindset.  You can learn facts, you can’t learn how people think and how they’re trained.

I really started applying myself in my writing in 2011.  A friend sent me his manuscript that he intended to publish.  Up to that point, I’d been reading books on writing but not actually doing the work.  Maybe I was more in love with the idea of being a writer than doing the writing.

Him getting down to brass tacks convinced me that I needed to get off my ass and do it.  From 2011 to 2014, I wrote erotica under a pseudonym.  It paid the bills and gave me experience, but wasn’t really what I wanted to be doing.  I picked it because I knew a few places I could get feedback on my fiction.  That helped tremendously.

In 2014, I switched gears to writing science fiction.  I’m a lot happier and surprisingly I’m having more success.  It’s a win-win for me.

Empire of Bones, Liberty Station, and the soon to be published The Scorched Earth: Grid Down are all up there.  In each one, I was exploring a new world and that’s exciting to me.  Figuring out all the details, settling in on who the characters are, those are what really excite me about telling stories.

Honestly, there are a number of characters scattered throughout my novels that have bits and pieces of people and events from my service.  It’s amazing how things from thirty years ago color the characters and events as I write them today.

I can’t point to any one person or any one thing and say this was directly inspired, but it all comes together in a whole that was affected by my service.

How many of the scenes you wrote were inspired from your service?

There have been a few.  I’ll admit that there are some that I’m tempted to write but just don’t know that I should.

Like the question above, little bits and pieces are peppered throughout my writing.

Do you feel like your writing has served any therapeutic value for you?  Has it helped you process your experiences?

I didn’t serve during wartime, so the writing is perhaps less therapeutic for me than it might be for others.  It has certainly helped me understand things that happened thirty years ago.  Given me insight into why people did things the way they did.

I think I would have to say Harry Rogers.  He’s one of the lead characters from Liberty Station and my Humanity Unlimited Saga.  He lives in tough times, but the world is opening up all around him in unexpected ways that he never believed possible.  He’s like Christopher Columbus.  He gets to explore the universe.

Admittedly, the world he comes from is a lot like our own with the problems turned up from a simmer to a boil, but I think he would be the most interesting to explore beside.

Of course, there’s always Princess Kelsey, too.  She’s in the far future and having to deal with all kinds of changes to her life and challenges that would be a lot of fun to be around.  Until the plasma cannon went off.  Then it might be a little less fun.

Seriously though, the characters I write would all be interesting to serve with.  Each of them has things that make them special I honestly can’t think of any that I wouldn’t want to serve the side.

None.  I write characters that I like and each have plusses.  Of course, serving with Princess Kelsey might get me killed, so there are some downsides to her exciting life.

What are you currently working on?

I just finished writing The Scorched Earth: Grid Down. It will come out in early February.

I’m also writing book 7 in The Empire of Bones Saga.  I hope to have the draft wrapped by the end of January.  That should put it out in early March.

I just finished reviewing the audio for Ghosts of Empire, book 4 in The Empire of Bones Saga, as well.  I suspect it will be out in February as well.

One additional thing to the “how people can find me section.” I have a new releases mailing list people can find at my site.  That’s the best way to hear about my new stuff.

If this convinced you to find out more, look up Terry!  Seriously, you won’t regret it.  I hope you all had a great time getting to know about him, because I’m a total fanboy!  Don’t be afraid to say hello here or on his own plethora of websites or on the extremely active Facebook page for the podcast.  If he doesn’t respond quick enough, glitter bomb him!  Mwahahaha!!  Or join the army of people making hilarious Sailor Moon memes of him and Paul E. Cooley.